I am preparing for my second Planned - Unplanned trip. FYI: I am only planning for the 'Planned' part, not for the 'Unplanned' part for now. This is what happened on the first Planned Unplanned trip,
http://www.haringo.com/2013/05/tiruchendur-kutralam-manjolai-trip.html

The certainty of the trip is still 85% with 15% of odds against the trip.

This is the second version where I am also taking my bike along with me. More on the trip later. Now let me jump in to the negotiation part. 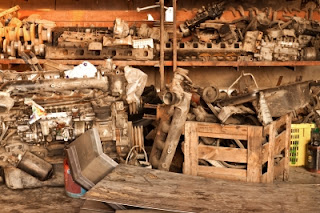 I had an accident back in 2011 traveling at 90 Km/h (55 m/h) (http://www.haringo.com/2013/06/premonition-oct12011.html). I did not change anything much on the bike after the accident. The handle bar is still bent, so is the fork, front shield broken, crash bar, and so on. Along with it if the left switch assemble. This part of the switch controls the indicator light, headlight high beam/low beam and the overtake pass light. All of these are important for a road trip. So had to change the assembly. Checked with the dealer, it is Rs. 600+. Made a quick trip to Pudupet. The inner streets of Pudupet are narrow,  with jam packed shops shoulder to shoulder with spares hanging all around. All are second hand spares from recycled vehicles. There are different theories on how these bikes reach to a recycle state in the first place, which is a different discussion.

I went in to a busy gully. There were guys both sides asking what I was looking for. I did not want to answer anyone until I knew the shop had similar items. All I was able to see was front shield, mud guards, electronic speedometer, shock absorbers. No sigh of the left switch assembly. I was almost at the end of the row of stores, so had to ask someone for it. After being passed on to 4 shops, finally someone said he has what I was looking for.

I thought, the road I was in was the narrow one, it branched in further which can only take only 2 - 3 people standing shoulder to shoulder. More spares hanging around than the walls that I was able to see. He showed the assemble. Bling That was what I was looking for. Now starts the costing. He had to check with his boss for the cost. He asked for my mobile and called his boss. After a quick conversation he started at Rs. 400. I told him the original is for Rs. 400 and cannot pay that for a used part. They were only throwing a number and did not expect to hear a original price. He wanted to talk to his boss again. I redialed the number and the trusted True caller showed it was "Pudupet Yousif".

I asked this guy, if he was calling Yousif bhai, he said yes. I told him I am his customer. Now he had to convince Yousif bhai and the price came down to Rs. 200. 🙂