This New year as with the past two years, decided not to be anywhere near a templated celebration. Until  the last week of Dec/2015 my plan was to join a group of friends and make my way to Ooty. The group was to come by a mini-bus, with my new found love, I decided to make it on my bike. Preparations as with any other long trip, started a little early. This time was to upgrade the protection. Things were falling in place but the last week I had to back-off from the Ooty plan due to a situation I am trying to avoid for a long time now.

Two days to go and heard Harish was lingering without a concrete plan. He had an invitation from Chetta (If I tell the name, he will be caught by his wife 😀 ) to join in his house. There were two more guys joining Chetta. I proposed a plan to go on a night trek to Nagala and also wanted to rope in Ramesh.

This was the plan until almost 6 in the eve of the 31st. Was home after spending time with Nagu to get an helmet and have his new RE 350 delivered. Nagu also carried the tarpaulin with him to use for our trek. Ramesh TL did not say 'yes' or a 'no' for his leave request, leaving 'no' as  the answer to take. Now it was me, Harish, Chetta and his two friends.

Harish came home by 8 pm on his bike, we swapped it with my other bike. Started packing, called our Chetta to get the pick-up location, then was the first twist in the plan. Chetta was already near high and was proposing us to join with him in his house. Sorry Chetta, I have to go away at any cost. So it was me and Harish. We went to consult with Gokul (Google) and quickly selected Bellam caves for our ride. We will sleep in Nagala, morning make our way to Bellam caves and be back.

Harish backpack on my front, my backpack was with harish with necessary items for a short trek. We went on my bike leaving the other bike behind.

Everything went on well till Park Sheraton, then was a jump in plan to go to Rameshwaram, take the ECR, go on a long ride. With little to no hesitation we took the turn and headed to Rameshwaram.

The first stop was in Mahabalipuram. Dinner in Guru hotel, one of my fav place in Mahabs. We spent time in the beach, hopefully only the two sober souls in that area. It was still around 10 - 11 pm, we started to Pondy, our next milestone and the place we decided to rest our back.

Midnight (The break of a new calendar year) went by on the way to Pondy without much of commotion. Nice.

We reached Pondy past 1 am. Stopped for a tea. Road was filled with templated activities. I wanted to rest my back. Harish suggested to settle in a petrol bunk. Sounded like a plan. We crossed one, did not stop. The next one was already shut down. We went in, no one active. We could see people sleeping inside the office room. We picked up a place under a tree right next to the Air pump. With a bed sheet with me, this was a luxury after experiencing a cold night sleep in Paravadhamalai just a week before.

We got our wake up call from a nearby mosque at 5:15 am. We got up and started.

We took the ERC route the whole way stopping in Tharangambadi after hearing about a Danish fort and for breakfast. 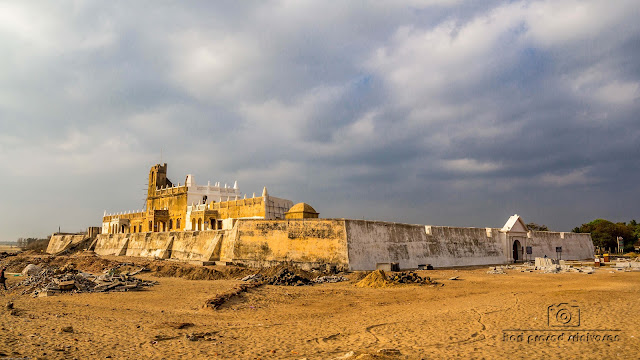 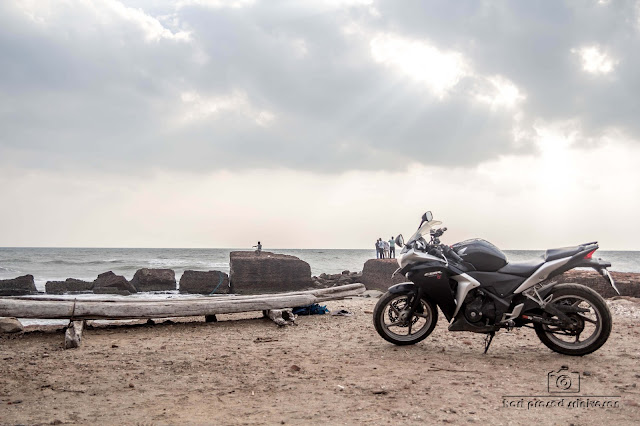 With much effort we reached Rameshwaram at 2:15 pm. The final stretch of road and in perfect condition giving confidence to go past 100 kmph which helped make up lost time on other stretch. Very few were in a poor condition. 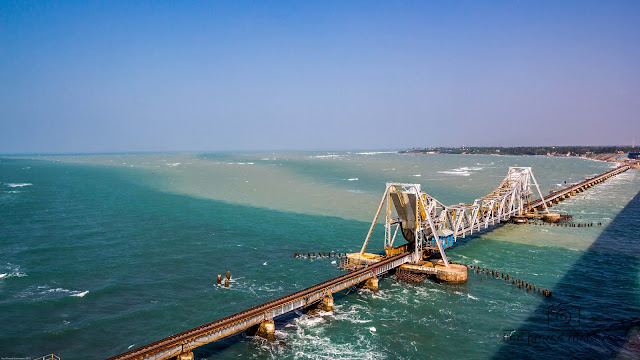 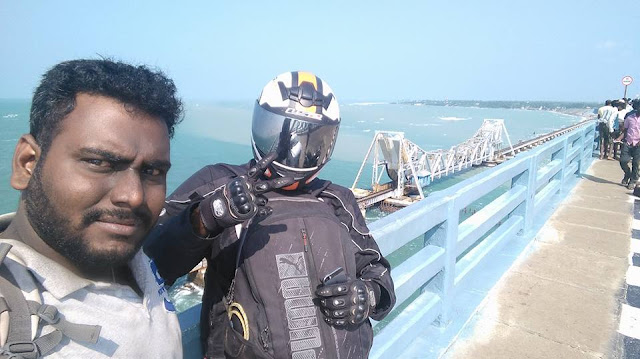 After reaching Rameshwaram it was time to talk to people and find a budget accommodation. We skipped a place where a night will cost Rs.1000. I told him I am looking for something around Rs.700 for two people, then we got a place for Rs.500 just next to the place we skipped. It was a well maintained room, as clean as you can get. It had a fan, 3 walls and a partition separating this  space from the spacious lobby, a table in one corner and that's it. No bed, chair or any furniture. Perfect place.

After dropping all our baggage, we went on to a tourist mode. We started off to Dhanushkodi. It was a 22 km ride. Harish took on the drivers position as his helmet did not help much on the highway.

We reached to a point after which vehicles were not allowed. We started to walk without knowing how far to walk and what to expect. It was a narrow piece of road with beach running on both the side not more than a few meters away. Constant gushing wind was spraying sand all over filling in all places it can make way to. We also spotted vans riding in the shallow part of the water, thinking they were showing off to tourist.

There were constant discouragement from people walking from opposite direction that they were not able to make it to Dhanushkodi walking for hours and are returning back. We still kept going as we had nothing else to do. We still kept asking people walking in the opposite direction on how far it is. Just 2 guys gave the real picture. It is possible (Nice to hear) and we can try to get a van to return, it is not easy to get it for the return as it is already filled to take the onward journey. These were the vans I thought were showing off on the beach. These actually ferry people.

We reached Dhanushkodi, heard about the story behind this once buzzing town before the 1964 cyclone which washed away the entire town. We also met a survivor from the cyclone, who made it to Rameshwaram clinging on to left over railway tracks. Could only imagine what people would have gone  through when the disaster took place. 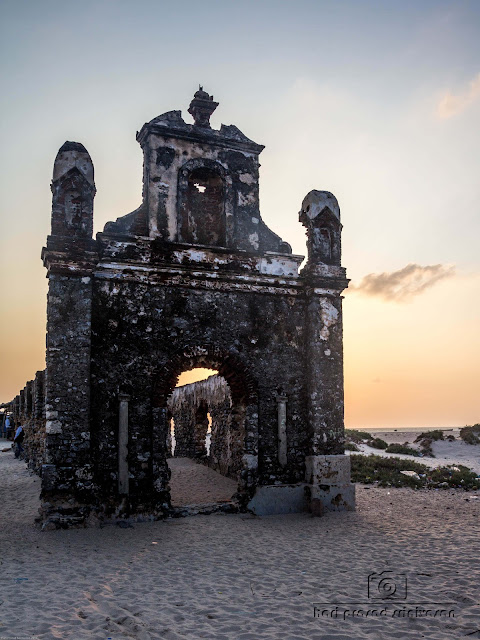 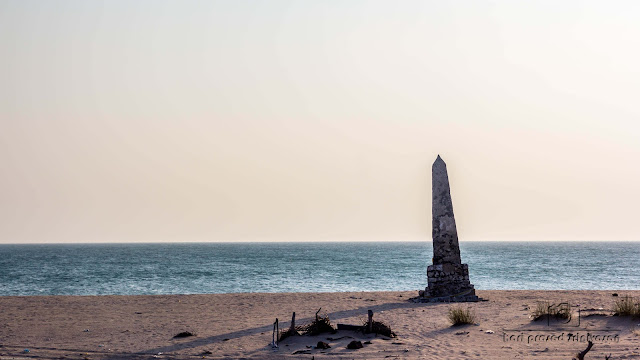 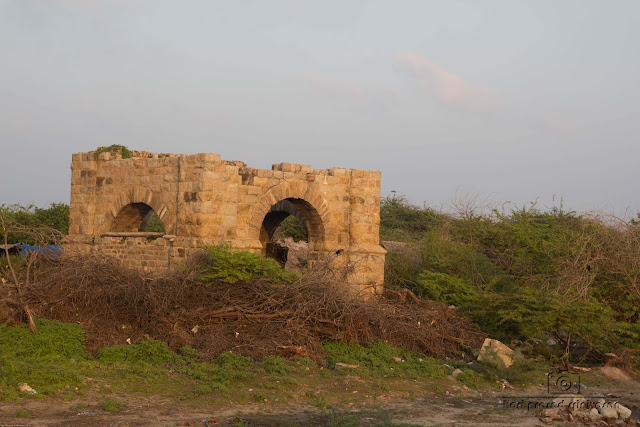 We took a van on our way back. The van driver charged Rs. 50 for the return after much of negotiation. The two way cost was Rs. 150.

We reached Rameshwaram, freshen-up and went to the temple after visiting the Agni thertham which is right behind the temple. This temple was huge. Not much crowd. The visit was over in about 30 min. 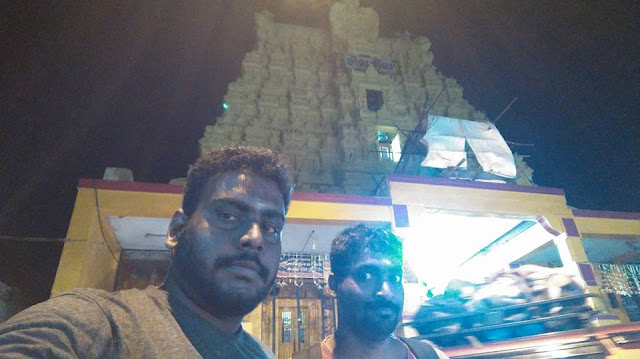 We got stuffs for the night and went back to our room and called it a day.

The next day was our turn back day with 550km to go to reach back home. We decided to take the Tiruchy route instead of the ECR route on the way back. We visited the Navagragham temple inside the sea (Yes, you read it right) in Devipattinam. We took a halt in Kanadukathan for a Chettinaud lunch. We were suggested Nathans cafe just 2 buildings next to the famous 1000 window house. The lunch was a bit pricey, still was good for the price. Clicked a pic of the 1000 window house. 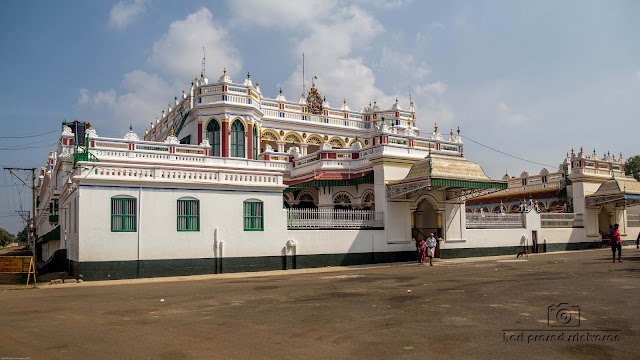 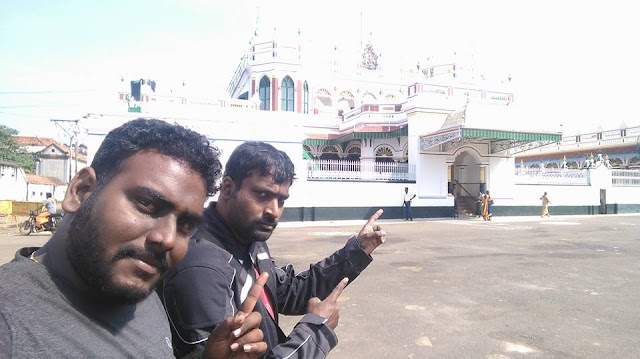 After much discussion to go to Kodaikalan or to Ooty or to Pondy, we still had to return to Chennai as Harish was tied up for Sunday 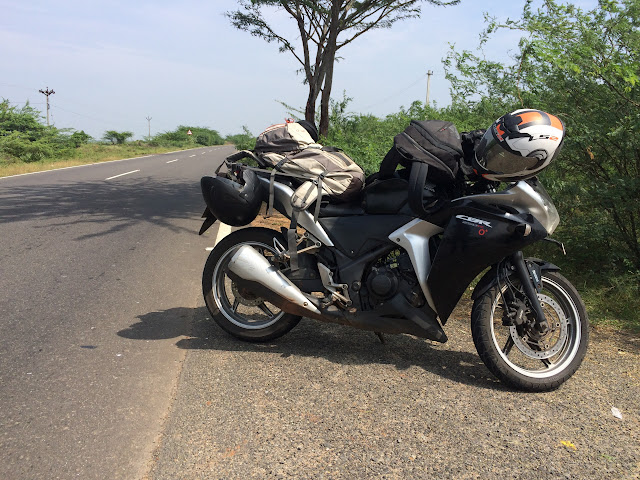 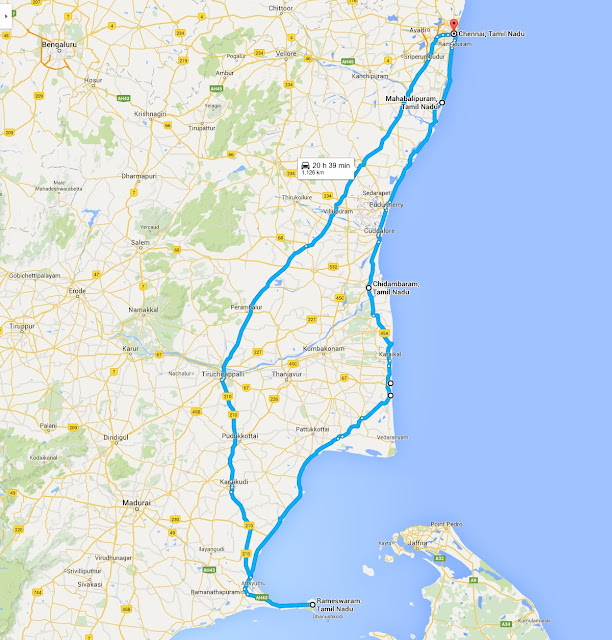 Chennai at 9 pm and we called it time well spent.

This was the first ride I was not doing solo. Bike handled well all the way through all the road condition. All in all this was away from the set template for a new English calendar year.