30th October 2015
The dawn awakened in Tambaram on 6 in the morning but we guys got ready way before that to view the 5 o’ clock road after a long long time. And hey! Did I fail to mention that we were going on a one day trip to Nagala West! Well, with eyes that betrayed our tiredness, we boarded the bus and lo and beyond!! We just reached Periyapalayam for tea so that some of us can function like normal human beings. We were a group of 25 (21 in bus and 4 in a car), led by seasonal trekkers like Harish and Hari (who btw have already paraded the place). By 10 in the morning we reached a place that was pretty far from the foothills of that mountain. And believe me, that thing looked huge!!! Heaven knows how I am gonna climb that place. 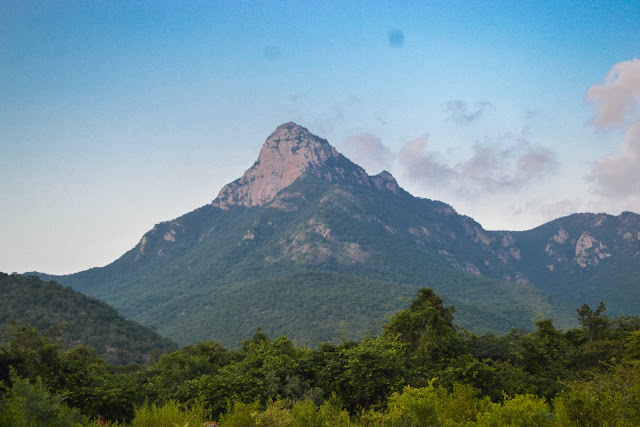 Each of us 25, were given a thing to hold and I was given a chips packet (yum!). Others were not as lucky as me though, poor people! After posing for a few shots we started our yatra to the base of the mountain. And lord what a walk it was! After avoiding walking under the sun for many years, I had to lose all my shine in just 15 minutes! Where is Yami when I need her?!!! 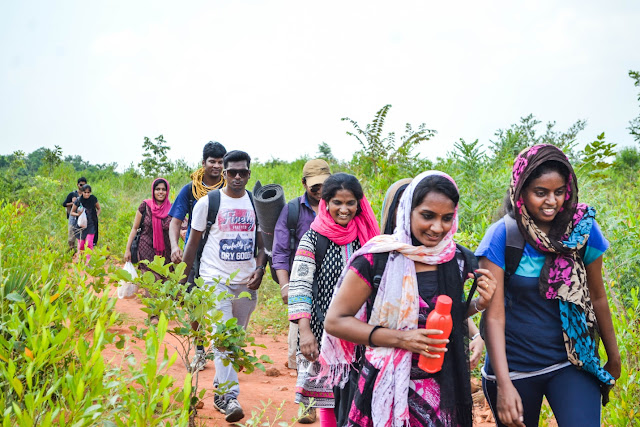 And lo we went searching for the first pool (for that is where we get our breakfast) and it just did not seem coming…. Instead Captain America (coz he carried the lid) and me found loads of obstacles (rocks and pits) that would put Madame Hydra to shame!!

No wonder the relief was absolute when we reached the entrance path of the mountain (coz that’s where the sunlight plays hide and seek and you breathe a little). But by now I seemed to have a new dilemma. The thorny plants keep grabbing my chips bag for some reason and I held on it like my lifeline. (Couch potatoes would know my misery!). Finally!! We reached the small pool for breakfast and the few slices of bread and jam I had never tasted so heavenly. Some even developed weird taste buds to have pickle with it. 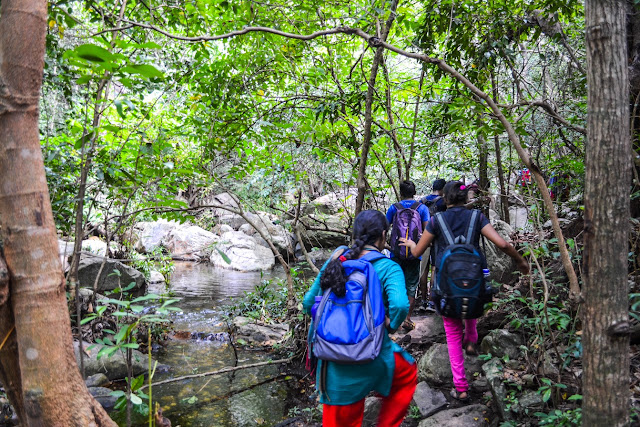 After the shortest break I have taken in my whole life, we started once again to our final destination ‘The Second Pool’. In between the journey, we encountered dangerous places that put Indiana Jones movie to shame. With lots of slips and a few bruises, the second pool was found. 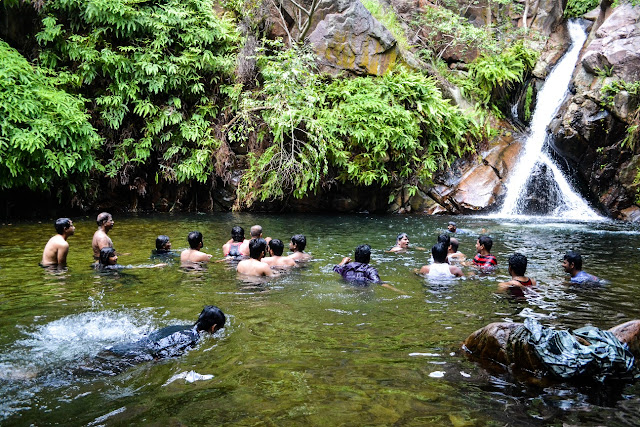 It was pure bliss… the feeling of destination reached. We girls jumped cautiously into the waters led by the brave Radha and Keerthi but that’s when the problem started. Underestimating the temperature of the water, my legs started giving way to cramps (that I have never got before in my whole life). My entire body shook with pain and I guess I shouted out coz people started looking at me with concern. Hari, a trekker gave me instructions to subdue it but that made me cry out more. (I guess he was born a TL if you get my meaning!!).And hence the name ‘Cramp’ was born (for me obviously). After it subdued, my interest waned and I started with a group of girls to proceed with the cooking. 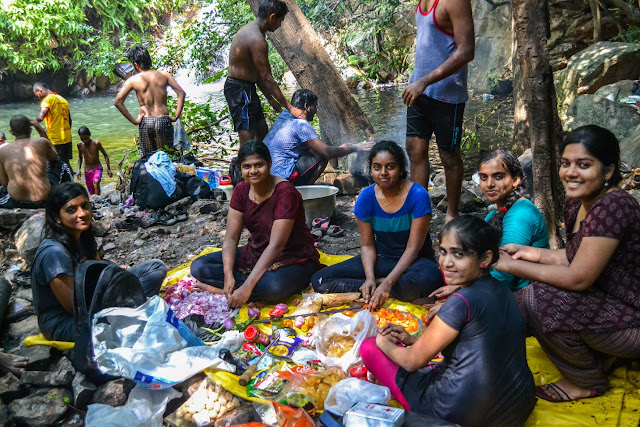 Since the trampoline in which they sat was muddy at the ends, I helped them standing. But Mr.TL thought that I was just looking into the process. Gradually, my job turned to that of a guard coz there were other group of trekkers cooking near us and the smoke was making our eyes water in addition to the onions we were cutting. So I used my stole to drive it away. And once I started I couldn’t stop for then I became a fan to fire through the cooking and I pretty much stayed there for the better part of the time. The others eventually got bored with it and went to the wetter pastures. I could have too but Mr.TL wouldn’t accept it. After numerous brain-storming sessions about the amount of spices to add and a bit of snack with the left over cucumbers we completed the non-veg curry (yum) done by the boys of the boys and the veg pulav done by us. In the midst of it was the photo session by TL who looked like he worked for a couple of films. 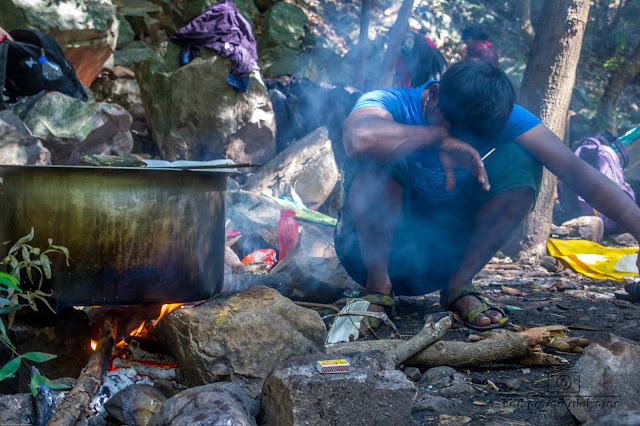 After cooking we hit the pool; others - with joy and me with apprehension. TL and the others managed to force to to go by the waterfalls and it was exhilarating. The water falling on top of my head made me feel that my hair was falling off and I was generating electricity. By then TL and team felt obliged to teach me a few swimming tricks (by threats naturally) and I really worked an appetite by those kicking and drowning. 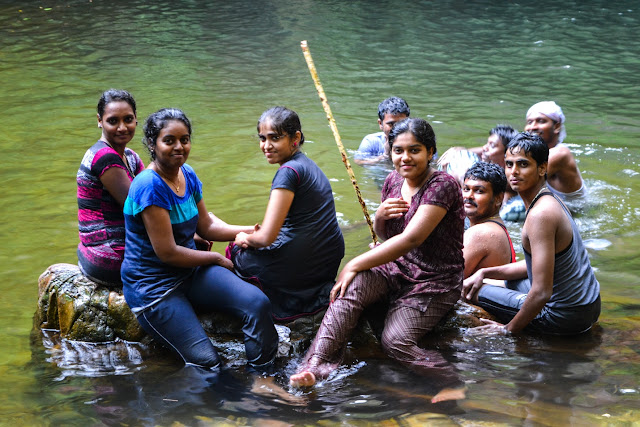 With a hearty lunch, where since we were the hosts and were served the last obviously, we were impatient enough bother with plates and ate from the lid of the rice pan. Surprisingly I felt full with a few morsels. Might be becoz I drank a lot of water from my swimming lessons.
After lunch it was pretty much a wind up for we had a slight drizzle and wanted to come down. A few still went back to the waters to prolong. That’s when the second misfortune happened. My sandals broke in my left leg. After a group photo, we all started from the pool and surprisingly my legs got accustomed to the slopes and terrain and moved on its own violation. We stopped only once and reached the bus by record time. By the time my sandals couldn’t bear it and gave away on both legs(Well time for a new trendy piece then!). 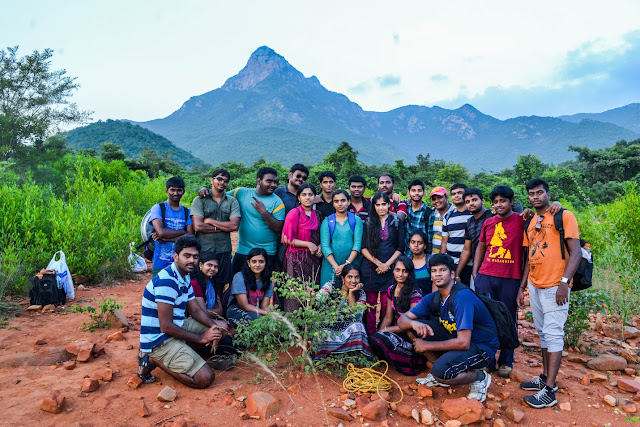 In bus, we stopped for refiling our canteens and there was a feedback session where I found out that a couple of them got lost and miraculously found their way out (God bless indeed). It was then that I found out about the root cause for this trek. One fourth of our money, around 5000 bucks will go to autism affected kids in Kumbakonam – Sudar Trust. For a person whose at-most charity accounts to parting with a few coins to the vagabonds on the road, this felt like something big.  Organized by Harish, these avid trekkers not only enjoy their outings but also work for a root cause. Another named Divya, working in Photon, is a member of the literacy expedition named Vaazhai (NGO) that simply wishes to eradicate illiteracy in Viluppuram District. A mighty project, she added that there were so many cases and so few volunteers. Not only that, the team also volunteered for the first Kid-a-thon in Chennai that went on to be a huge hit.

It was the end of the one-day trip, and we tired mongrels came back home with sore legs but gained a vivid experience. Many amateurs said that they would like to have the experience again. I donno about others but this day would be remembered for eons to come and the experience cherished by one and all (Not to mention the terrible leg pain that made me bedridden for a whole day!!!).

Not all is gone through, for people who think they have missed a good opportunity. These people are volunteering for the “DUSK TO DAWN” marathon this month (NOV 28th), a rather upscale and one of the biggest event in Chennai to raise funds for SUDAR TRUST and Vaazhai. Interested people are more than welcome to join us. Guaranteed that we would all have oodles of fun and satisfaction.