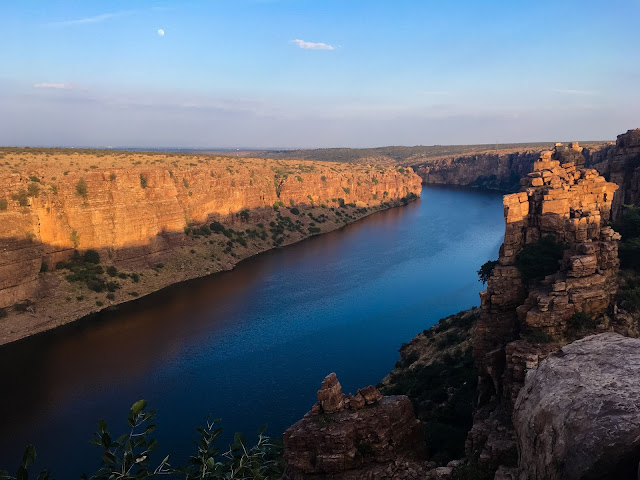 This ride is to escape from the commotion of New Year, I still cannot understand why all this for changing an English calendar year.

All was on track, except Parthiban who did not attend the call until 5:15 am. We had an ultimatum, to wait till 5:20 am, if Parthiban still did not respond, we have to drop a bike and go forward with 2 bikes. Finally he did attend. I picked to Purushoth from Perungudi, Muruga and Amaresh on separate bikes from Crompet. We all gathered right outside the Guindy Railway station.

It was a late start already. There were two routes, one through Nellore and another through Kadapa. After reading a few blogs, I selected Kadapa route. I told the guys to head towards Thiruvalur and Tirupathi from there. For some reason, Muruga did not catch that and he got off track from Thiruvalur. I was waiting there for a good 30 min, Amaresh already nearing Puthur, Muruga in a course correction after reaching Uthukottai.

We all gathered again in Puthur and then started moving forward. The road was excellent (at least compared to what was to come now) until Renigunta. Then you take a left that leads to Kadapa and Gandikota. After clearing the ghat region, we had an early lunch break in a Dhaba. You will find a lot of Dhabas before the Ghat region and few after that. From that point on you will understand why Google shows 7 hours 45 minutes travel time for 380km travel distance.  Trouble was in multiple forms: pot holes, marked speed breakers and the most notorious is the unmarked speed breakers of different size and shapes. No median is something we cannot even complaint. Still not worst than few of the roads that does exist.

We reached Gandikota by 2:30 pm. There was no security, no entrance fees. You just go on. Few had managed to come right till the fort on their bikes. 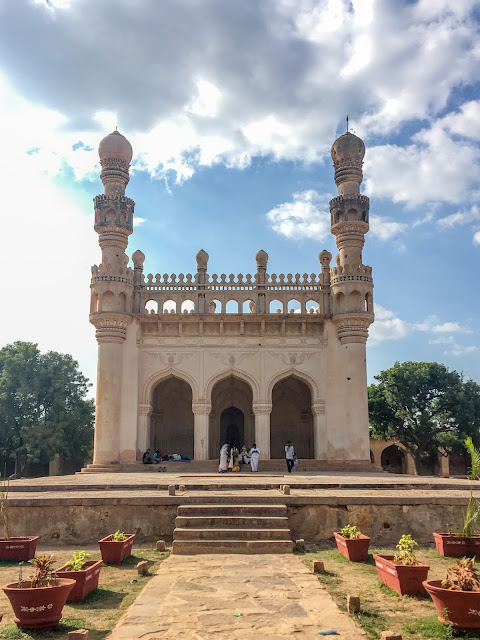 We took rest near the fort entrance, waited for the sun to go down so that we can get better lighting when we reach the river front. By that time, we also had a District Judge visit the place and the way to reach the top of the fort was opened. Amaresh was lucky enough to make it to the top. After that the doors were locked. With no signs in English, we had to come up with our own versions of what this building is and what it must have been used for. With sign boards like this, what else can you do in this multi-lingual nation biased towards only ONE. 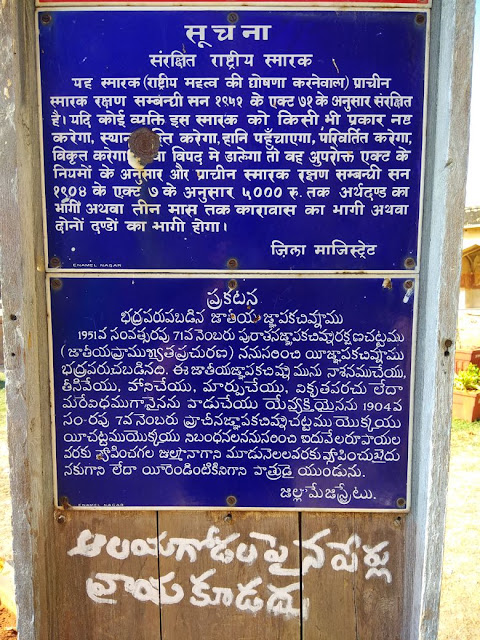 Then we went up to the temple. From there you get a good view of the fort and another temple right behind it. After a few clicks in the temple, we made it to the river front. Just worth it. Amazing view. Nature’s art work. A one of a kind landscape. Then I realized the Fort and the temple were just mere landmarks, people come here just to see this formation. We took a lot of pics here, then I went down, selected a rock and rested there staring at this mesmerizing place.
This is one of the better photo that Parthiban was able to take during sun raise the next day. 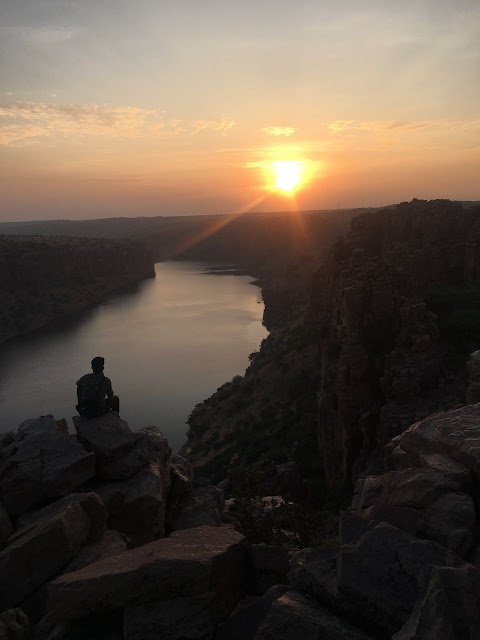 The nearby hotel run by AP government was already booked, we moved towards Belum caves, in 10 KM you get a small town and there are only two lodges there. Amaresh had already been here. So we took two rooms, Rs. 300 per room and Rs. 50 advance. The rooms were not tidy enough, toilet on one was not usable. If you got for this place, make sure you check the toilets and then pay. Good thing is, the floor extends out to another building’s roof, which you can use for sitting out and having dinner.
We went out to get our dinner. This laid back town was exploding from its bakeries, like everyone one wanted to cut a cake for the last day on a man-made calendar. Dinner was from 3 different places handpicked by the experts. I did not expect much, but we were able to get some really good food from this place. All went well and we called it a day by 11:30 pm and hit the bed.

We planned to leave for Belum caves by 7 am, after reading that the place opens only by 10, we again had a late start. It is 45 km from this town. Stopped for breakfast and made it to Belum caves by 10:30 am.

Belum caves welcomes you with a majestic Buddha statue. Majestic. Here is a photo that Amaresh had clicked: 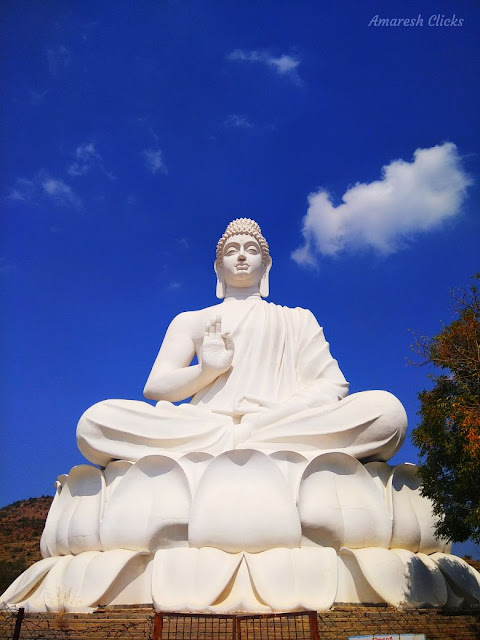 Ticket cost is Rs. 65 for Adults and Rs. 45 for Children between 5 - 10 years. Free for kids less than 5 years. We made our way in to the caves, first was a natural lit opening, then you move in to the cave that was well lit with incandescent bulbs. Wish they were LEDs due to the heat they emit. 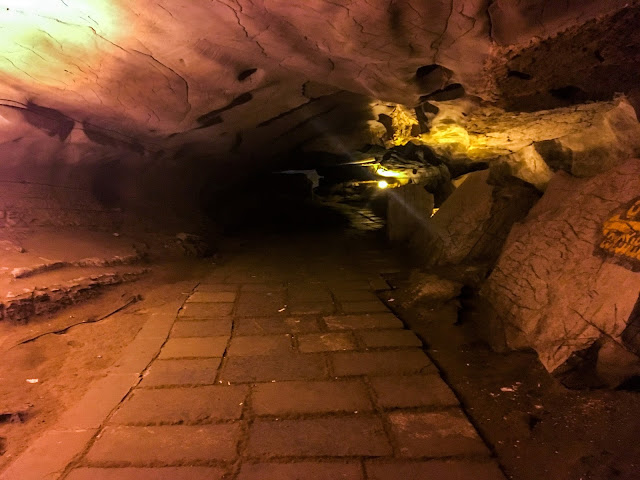 We walked for a couple of minutes with paths marked, but barricaded. There were two routes, we inquired in one and people said there is nothing. Muruga and Parthiban still wanted to check that route. Amaresh, Purushoth and myself went in a different route after jumping over the barricade. These were not lit, pitch dark and the floor was muddy, slippery in few places. Few said the place is under maintenance. Half way, Muruga and Parthiban’s route joint with us. All five made it till the end to the Mandapam, where we say the stalactites and stalagmites. These are nature made over decades or even centuries. With what we saw, this will disappear in years with everyone want to take home part of this wonder. It was already looking like a dehorned rhino.

Then we came to know water had seeped on to the caves about 2 months back and that is why the routes are blocked. Wiring were compromised due to which light and ventilation is not available inside past the main region.

We than came back near our room, had a quick bite and started by 2:30 pm. Had a minor incident on the way, with a bike skidding on an unmarked speed breaker. Few scratches on the knee and palm. On the bike again, scratches on the headlight doom and crash bar. Bike just few months old. I then decided to push as much as possible until we had day light, then slow down until we get good road again.

We now cleared the ghats region, stopped in a dhaba for early dinner. Amaresh and Muruga wanted to lay over for the night and start early morning. We dropped that plan and decided to make it the same day. A few KM from the Dhaba, we were on better roads, with some relief, we and slowly made it to Guindy by 10:45 pm.

All in all, the trip is definitely worth just for the Penna river view and Belum caves. If you are scrambling for a place to check from Chennai or Bangalore, you can definitely check this place. If you can book the accommodation in advance, it will be much more relaxing. If the roads are a little better and has enough markings, the riding experience would also have been much better. Otherwise, I would advise this trip.

Here is a write-up of another ride a last minute plan to escape the New Year, Chennai to Rameshwaram.