Thanks giving always gives a reason to pack my bag and head out. Last year it was a bike ride around Karnataka. Year before was around the Nilgiris.

This year the initial plan was for a solo trek in Vellaingiri hills (Coimbatore). Already had the schedule ready. Train and bus identities. Was waiting for my card billing cycle to be over for Nov, so that I can book the tickets. After reading countless blogs and also inquiring through friends in Coimbatore, Velliangiri seemed to be a gamble as forest department does not give permission easily, going solo will be a definite no. Even if I can get through the loop holes, wild life threat is always there.

After giving it a serious thought, changed my plan to head in to Kerala. Kerala was in my head for almost 4 months. This was the time. I was planning this on a shoe string budget (What happened was different). Train was the cheapest option to reach, but the tickets had already run out. Private bus cost was out of my range, so turned to SETC, by which I was able to manage both the ways within Rs. 1,300. I had to let go of any comfort. Which is not a problem when it comes to travel 😉 Had booked the rooms one in Alleppey for Rs. 320, another dorm in Kovalam also for Rs. 320 to go with the shoe string budget (theoretically).

The bus was at 3 pm on 24.Nov.2016 (Thursday). I planned to go around by public transport as much as possible during this travel. Made it to Koyambedu well ahead of time at 2:30 pm. No sign of the bus until 3:20 pm. Then I realized it was 3 pm IST (Read about IST). Bus slowly made it was in to the bay. After loading it full, the journey started at 4 pm (3 pm IST).

The bus reached Chenganacherry at 7:45 am. Now was the major task of finding the bus to Allapuzha. Task is complex as the buses do not have a route number or have anything written in English. You need to be able to read Malayalam or you need to run behind every bus to ask if it is going to Allapuzha. Here came up with a pretty neat trick. Checked Wikipedia for Allapuzha written in Malayalam. I was able to recognize "ழ" in "ആലപ്പുഴ" So my plan was to get in to any bus ending with ழ and the probability of it not being Allapuzha should be very minimum. Yaay, it worked. Made it in to Allapuzha bus with my own efforts 😀

In Allapuzha checked in to White House Inn. The room was clean, but did not have much ventilation to keep mosquitoes away. With the windows all shut close, the room did not have a pleasant smell. Otherwise no complaints for Rs. 320. Quickly had a bath and enquiry  about the place I can check, Tony, the manager there suggested Marari Beach.

Was back to bus stand and this time took the bus with help from others and reached Marari beach. The beach was a good 3.5 km from the main road where I got dropped. Did not take an auto, started to walk. Got called by a person in a scooter, he offered me a lift and dropped me in Marari beach. On the way, noted few water holes which I could try on the way back. Had nothing to eat so far, something natural will be a good start. 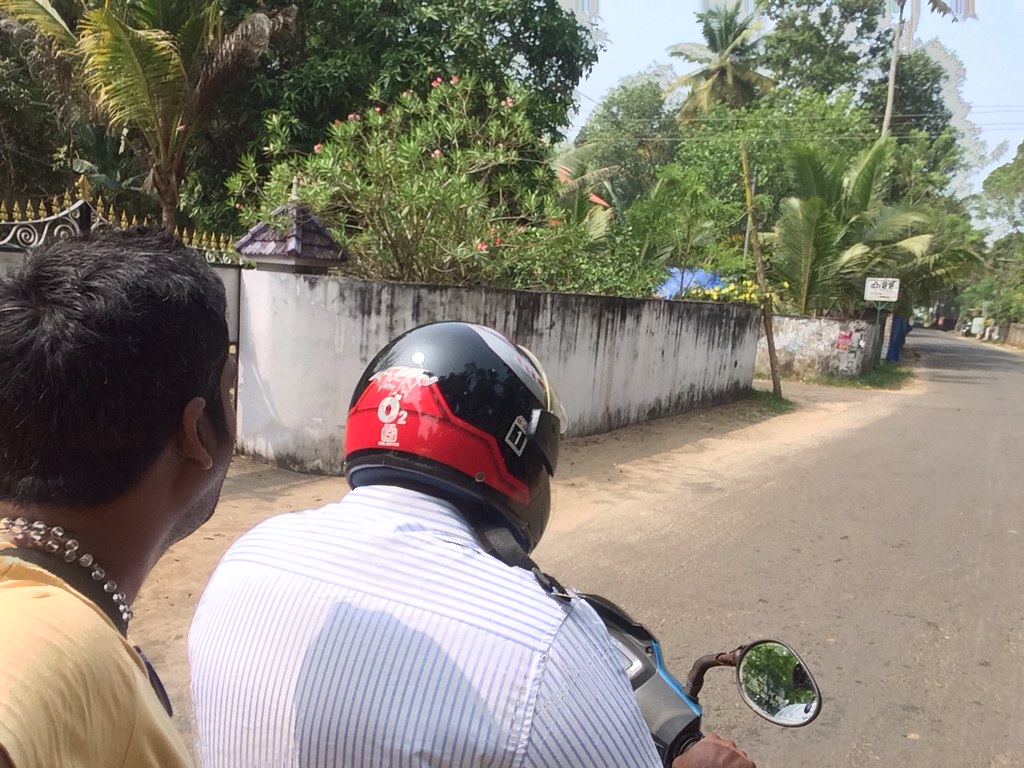 Marari beach is a long beach with rows and rows of coconut trees on  the shore. 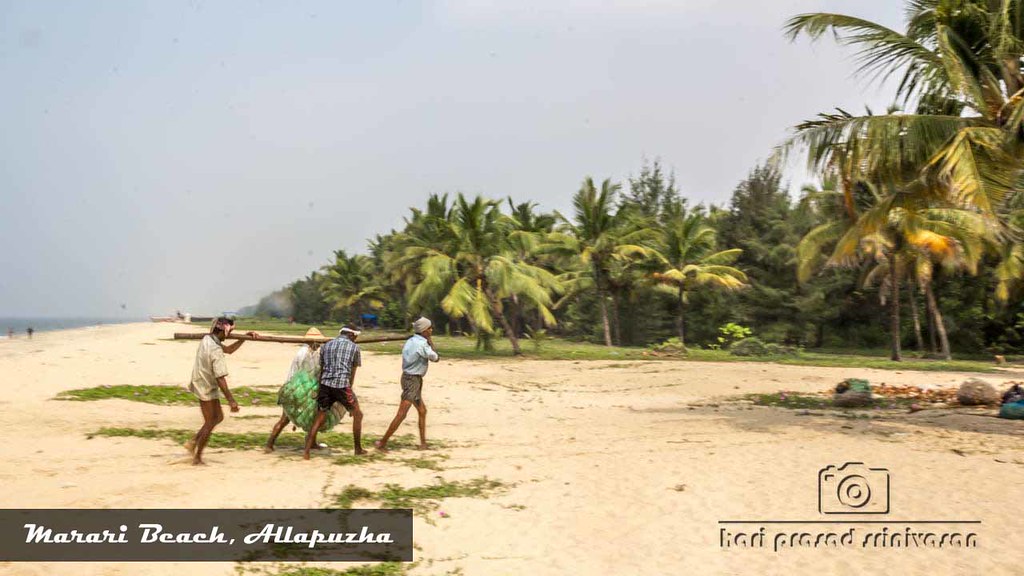 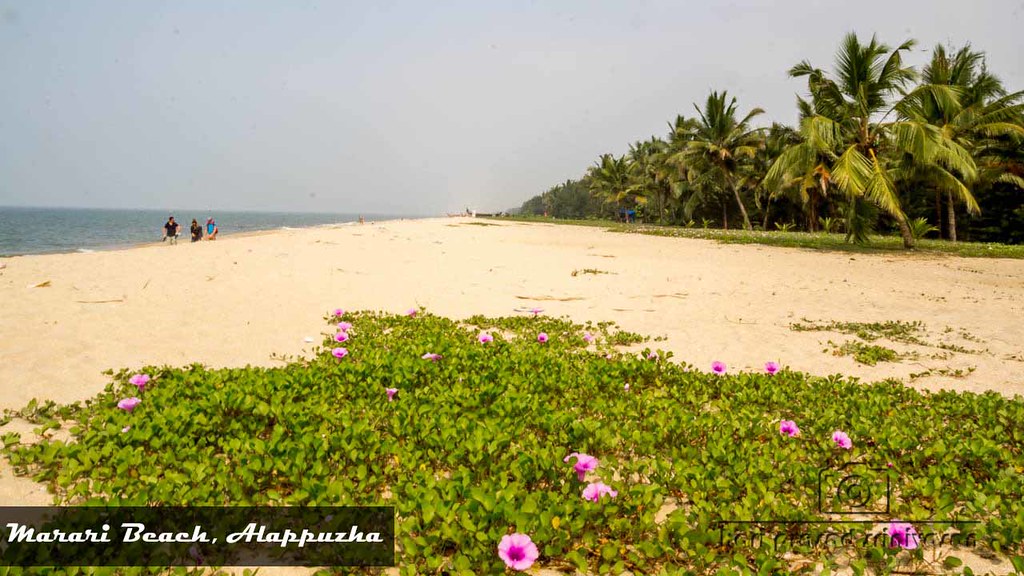 On the way back from Marari beach to the bus stand on the main road, got myself comfortable in a water hole and tried some spicy and tangy fish curry. Worth all the effort so far.

Then came back to Allapuzha, had lunch and went to the room to take a nap to be able to roam around again in the evening.

Evening walked all the way to Allapuzha beach. Sat down in an oasis right on the shore, with company of Malaya, made friend with Ansari. Shared a plate of fried fish with Ansari. He was telling about Allapuzha and places he had been and liked. Out of the discussion came two take away points. One was a place that served charcoal cooked chicken, near YMCA bridge. This is a small van with seats on the road. Ordered the chicken that Ansari had suggested. Added some beef and chapattis. Malaya was still in my head. Got hold of one right before they called it a day after standing in the queue outside like any shop in Kerala.

Called it a day.

26.Nov.2016 (Saturday): Got up and it was time to try the second take away from the discussion with Ansari. To try Kuttanad food from a shop near Nedumudi Beverage. I had a picture of a cool drinks factory from where the place got its name. I took a bus to Nedumudi, which was fortunately on the way to Chenganacherry, which will connect me to Kovalam, the next stop.

Got down at Nedumudi and was asking for the beverage. There it was and it was a wine shop. Sigh. They called it Nedumudi Beverage.

Going by the description given by Ansari, found the shop. It was almost empty. He asked me to be there at 11, I was there around 11:30. Got lucky, tried beef and some fresh water fish. Was not lucky to try the duck, which was on my list of things to try. News about bird flue is keeping Duck away from the menu. Spent some time and headed to Chenganacherry.

With a lot of googling, hearing from Ram and reading different blogs I decided to change the plan. To go to Varkala than to go to Kovalam for the day. As Varkala is between Chenganacherry and Trivandrum, I can finish Varkala before going south.

By then I was left with about Rs. 200 from the Rs. 2000 I had drawn before starting the trip. It was my turn to get grumpy about Modi, standing outside an ATM for an hour. Everyone were complaining and to add more a female fainted standing in the queue. With the pink note in my hand, next task it to break this pink note so that it can be put to use. A petrol bunk had agreed to give me cash, but they would give only 10s and 20s as 100s is in demand. With a bundle of 10s and 20s, next is to get 100s so that I can keep it in my purse. A lottery shop came to help. With all this, lost more than an hour. With cash in hand, wanted to try some good Kuttanad lunch. Asked a auto driver for direction, he made his quick buck by dropped me in a resort where he said I can get good Kuttanadan food. Inside the restaurant, I was the only one with a fantasy about Kuttanadan food, the chef was brought to the table and he was looking at me like I was asking a foreign cuisine. I was trying to explain to him talk about Kandhari Molagu, birds eye chilly to connect any dots. Only for the chef to agree to serve me a spicy fish curry. With disappointment, I seek refuge to Malya again in the resort. It was another auto ride to the bus stand and a quick walk to the railway station. Sabari Express took me from Cheganacherry to Varkala.

It was already nearing sunset. I wanted to reach the beach to capture the sunset. My luck ran dry, was late after waiting several minutes for bus to come and finally taking an auto to Black beach. Luck ran negative with two places cancelling my room reservation. Finally got a room in Ram gratitude inn for Rs. 400. It was a stone throw from Janarthana temple and you can throw the same stone twice to hit the beach.

Slipped in, refreshed and was out for an early dinner, so that I can have an early day on Sunday to cover Varkala and Kovalam. Indulged in some good food at Theeram, a restaurant right on the shore. Food was great and the bill taking a lions share in my total budget 😉

Early start became 8 am from the initial 6 am. Straight to Varkala beach. 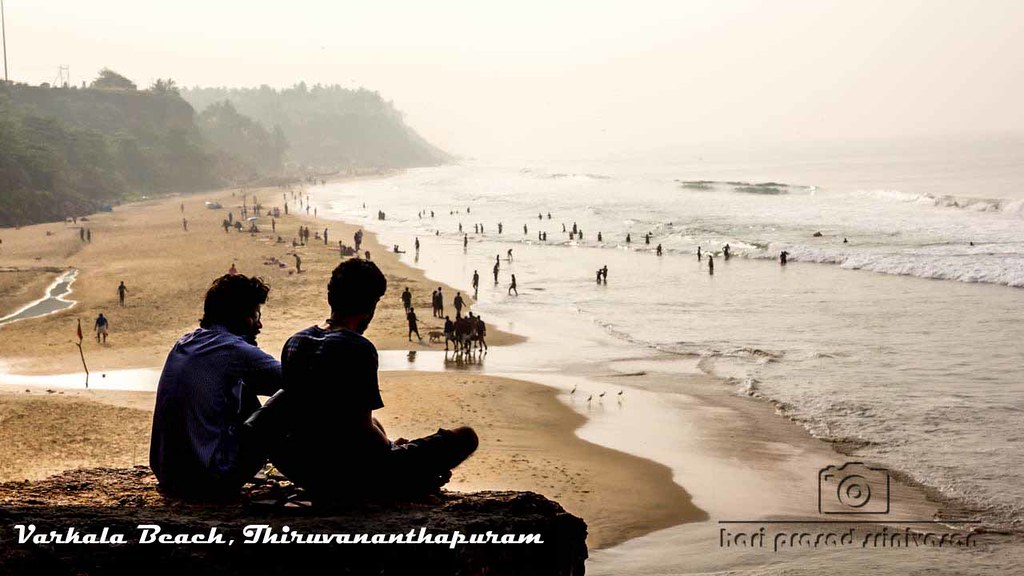 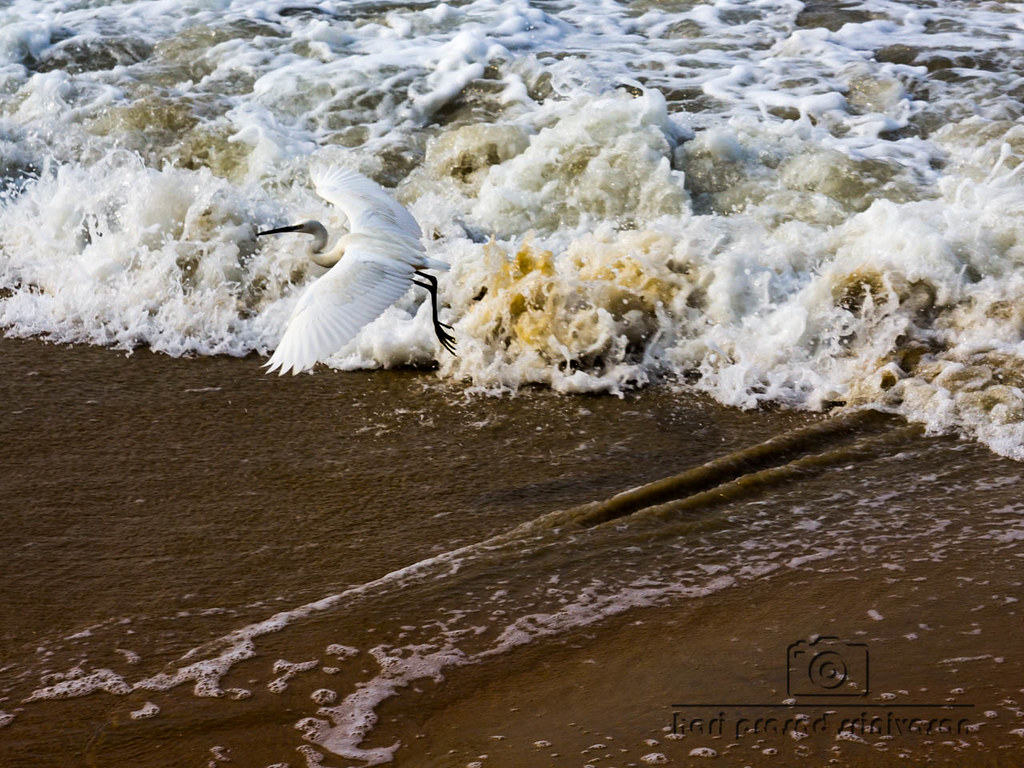 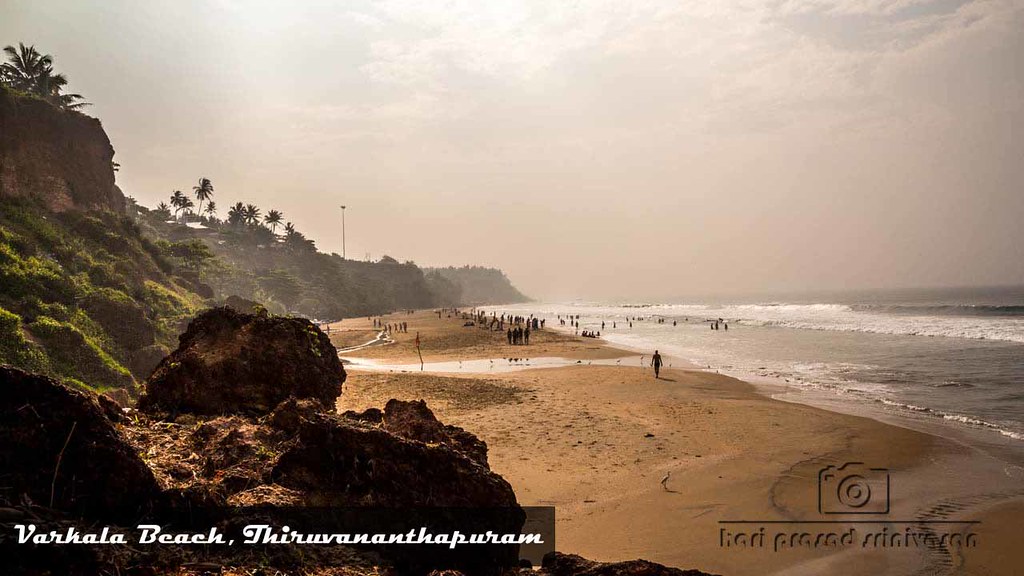 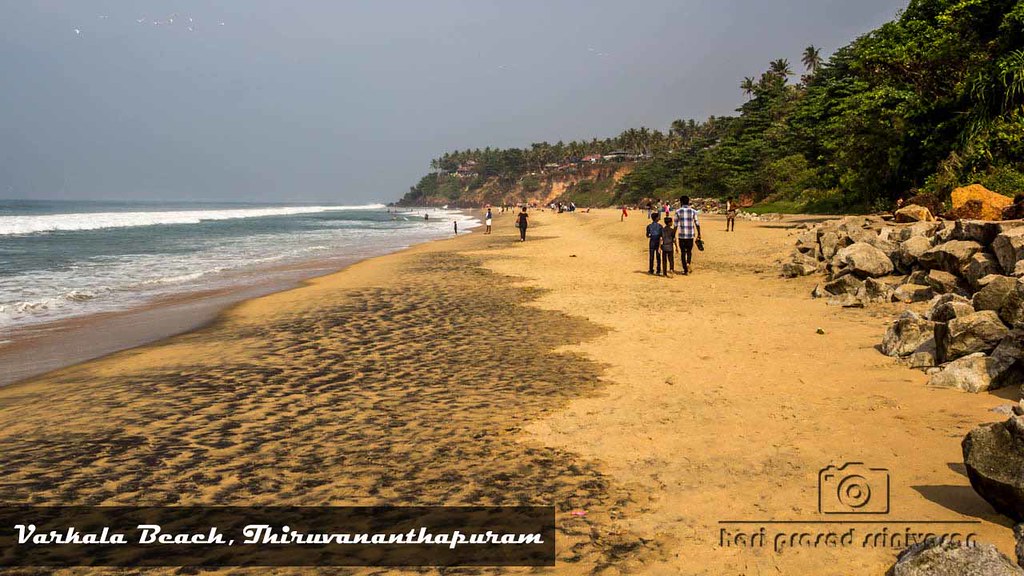 A quick walk up and down the beach and to the top of the North cliff. It is a beautiful setting. The beach was perfect. On the way had a chat with a Navy officer who was interested in photography and we were sharing our travel stories. He was telling, after being to all the beaches around, you cannot try and make a difference between most of  the beaches. I somehow had to accept that.

Next had parotta from a small shop, checked out from the room and was on the way to Kovalam. It was a switch between three buses; Varkala - Kallambalam - Trivandrum - Kovalam.

Kovalam seemed a bit more commercialized than Varkala. Good news is, all the beaches are pretty close by. Went ahead with Grow beach. 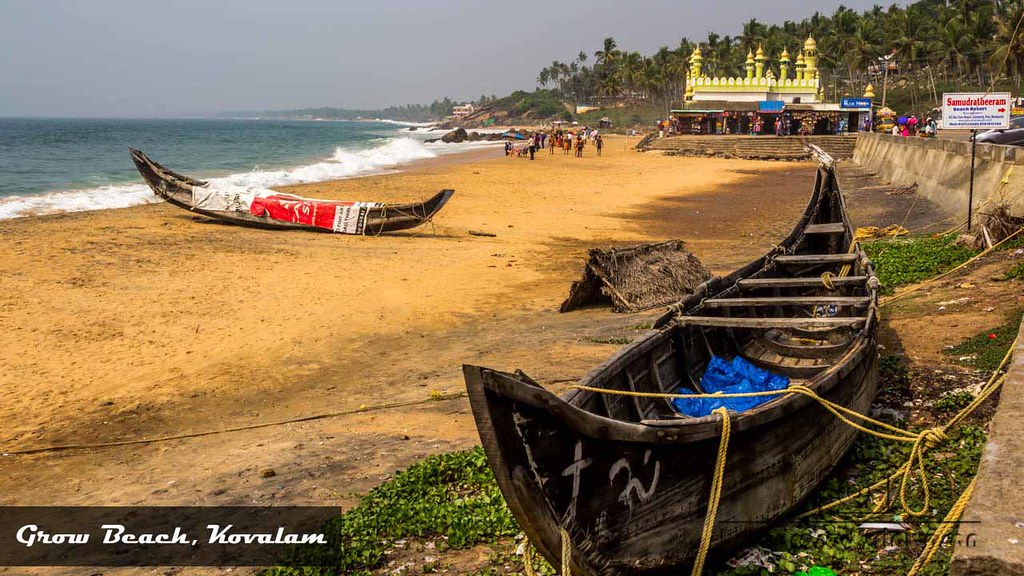 Before hitting the other beaches, wanted to find a water hole to sit down for the days share and some spicy food. The closest one I heard is 4 km away. Thumbs-up worked and got a lift for almost half the way. Bad news is,  the guy who dropped me says the shop is already closed and there is nothing near by. Heart broken, headed to the beach. It was a steep descend to reach Hawa beach. Light house beach is right next to it. 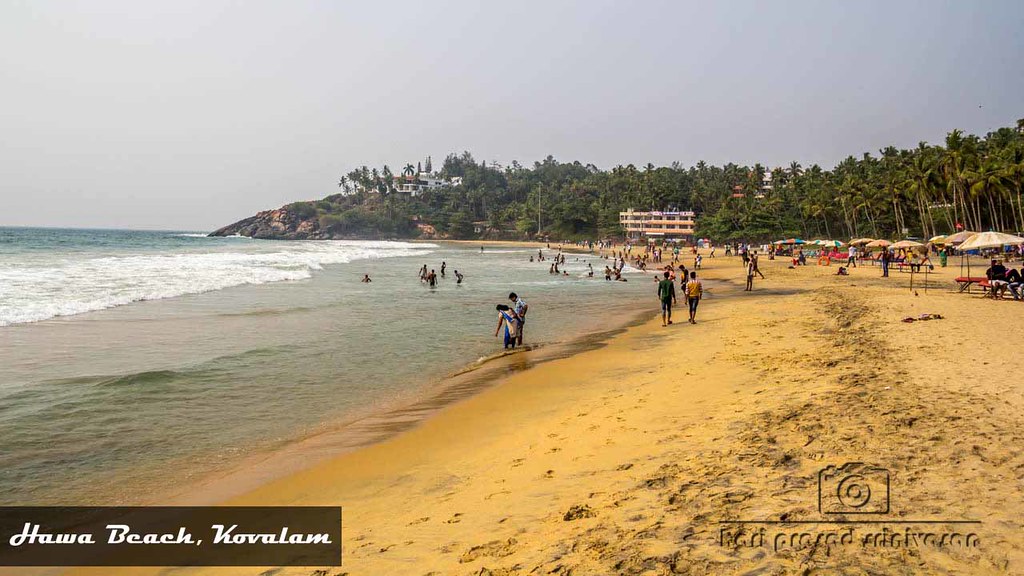 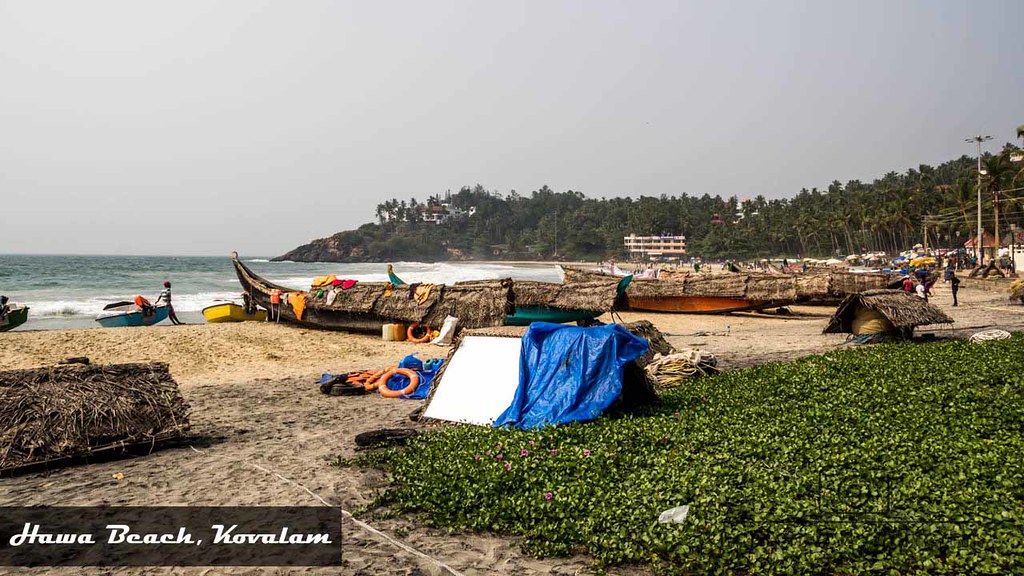 It was a scenic spot to again call for Malaya. Sat down a beach side restaurant. This time with company of a English man in my next table, who is a partner in a local hotel and also runs one in Bangkok. He was having a extended b'day party spilling over for the second day. We were talking about traveling, food and dogs.

Spent a good one hour there and clicked some photos from a vantage point between Hawa and Light house beach. 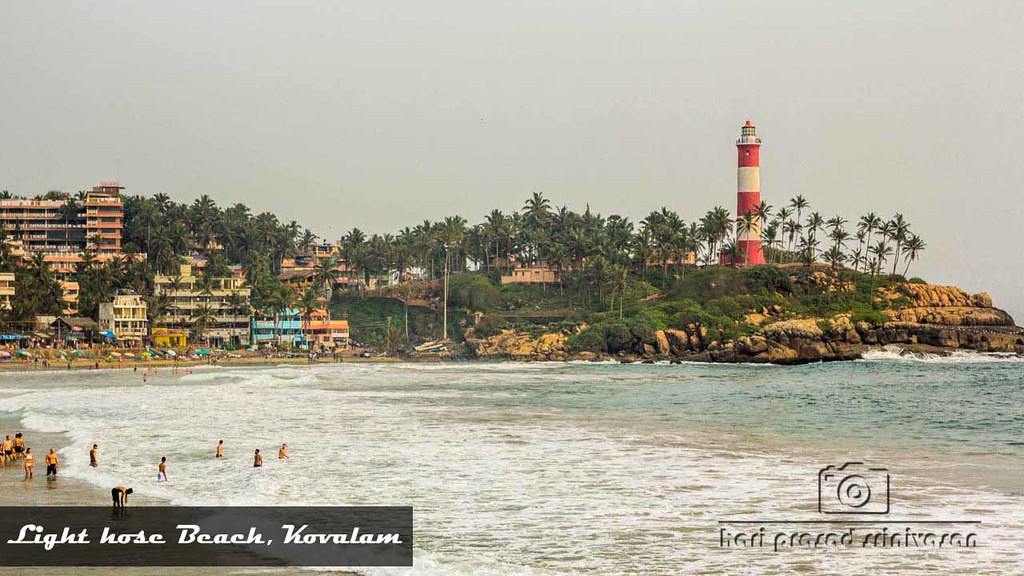 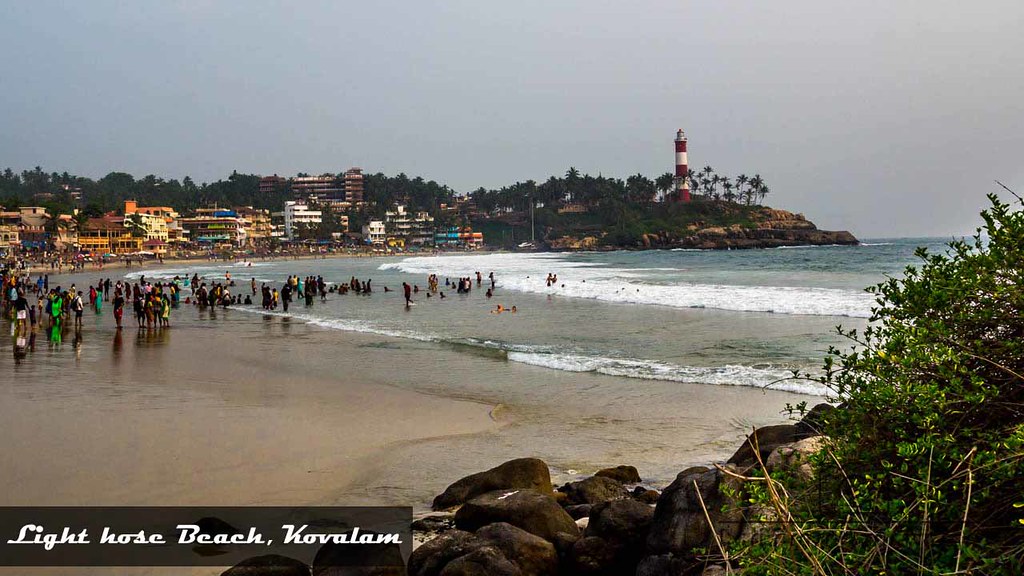 A quick climb up and straight to Trivandrum bus stand. Knowing it is 6 pm IST. Was sitting around till 6:40 pm. The bus rolled in to the bay. With no break in between (Don't know why) had to skip the dinner and straight for a morning tea near Villupuram. Bus reached Perungalathur around 10:30 am, and to home by 12 noon again by bus.

This is what took me around except for the 4 auto rides. 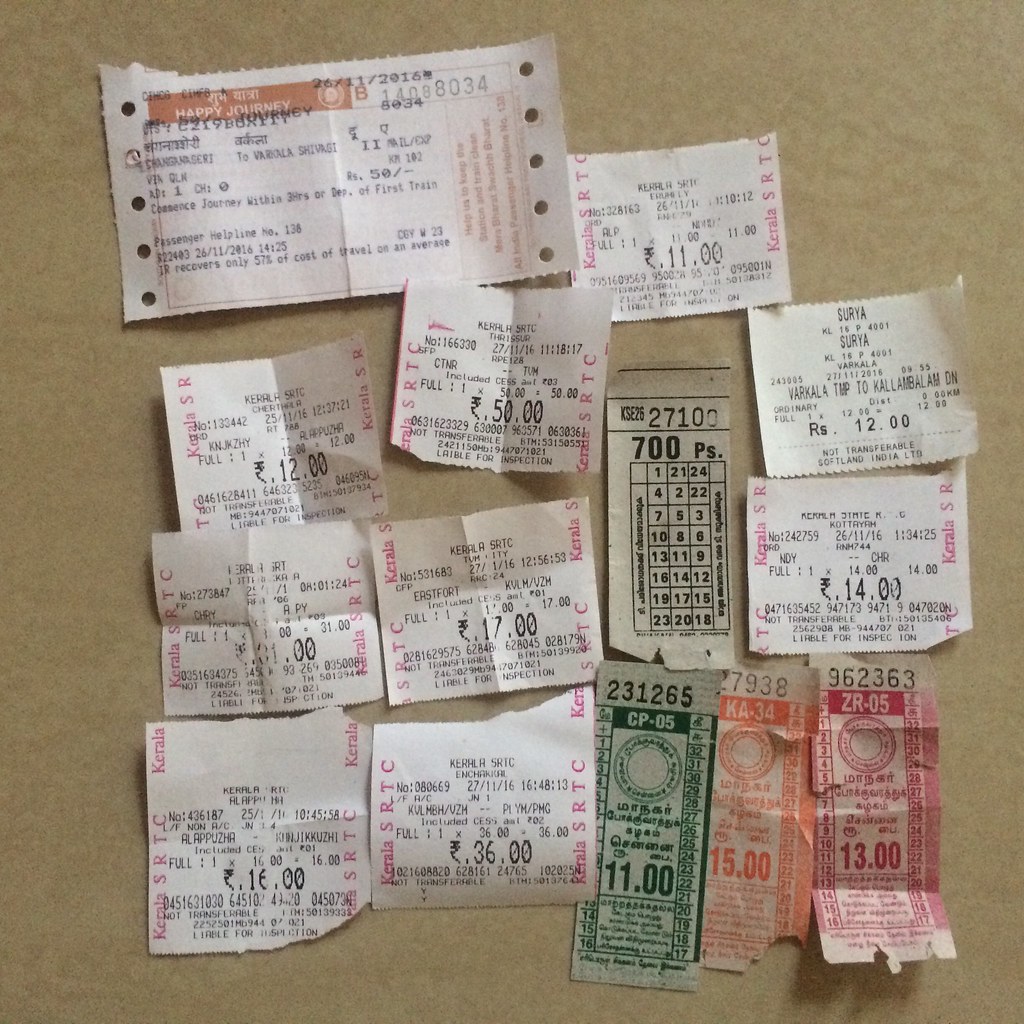 Overall this is a perfect trip for a solo travel. Good food, nice beaches, being a lone wanderer, it checks all the necessary boxes for a perfect get away from the routine. At times missed my bike, would have made moving around much easier. That too helped me to move out of my comfort zone and still have fun with the unknown variable around every corner. The shoe string budget finally costed almost a shoe at the end 😉