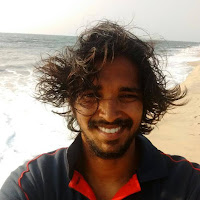 This is a contributed blog by Maari. Maari is a traveller, trekker and has completed the most grueling Ironman Triathlon.

For the past one year, I couldn't travel due to few reasons. Now that I decided to travel, I was looking forward to the long weekend this Republic day (2018). My wife agreed * (*conditions applied) to let me go on a trip this holiday. The condition was to take her and Kaniyan (our cute 1 month baby) to the same place wherever I choose to go, later when he's old enough :). So my trip started with this agreement.

My friend and I planned to go to Bangalore initially. My bro Hari then suggested an idea for solo trip. It turned out that my friend couldn't make it and then I decided to set out on my first solo journey. I am a big fan of beaches in Gokarna. Expecting the same kind of an experience, I decided to check the beaches in Kerala. Hari bro had already been to these places on his own and I too prepared to go alone to these beach destinations. Since it was a long weekend, there were no tickets available. My only option was to try booking tatkal train tickets and luckily I got them.

Here are the places I planned to cover: 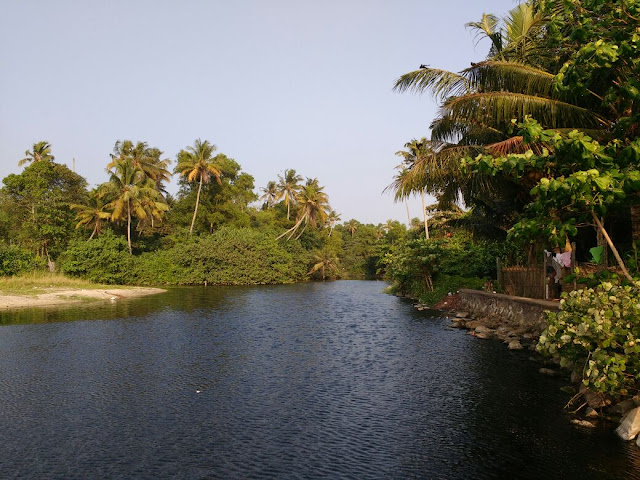 The route to Alappuzha while on the Alleppey express between Ernakulam and Alappuzha was breathtakingly beautiful. Lots of coconut trees and frequently passing lakes were a treat to the eyes. Finally reached Alappuzha at 10.30 am. As I had come alone, I had booked dormitory rooms for both days. My room was 1.5 km away from the railway station. I reached my room on foot. After freshening up started to checkout this places around and went to the backwaters place (boat jetty). Then started to look for Marari beach, I had thought that Marari beach was nearby but it was 15 km away from here, so planned to skip Marari beach and spend more time in Alleppey beach. It was time for lunch already, it was Kerala meals for lunch in a nearby eatery and took some rest in the room.

The evening was blissfully spent in the beach from 4:00 pm to 7:00 pm. It was the best thing this day. 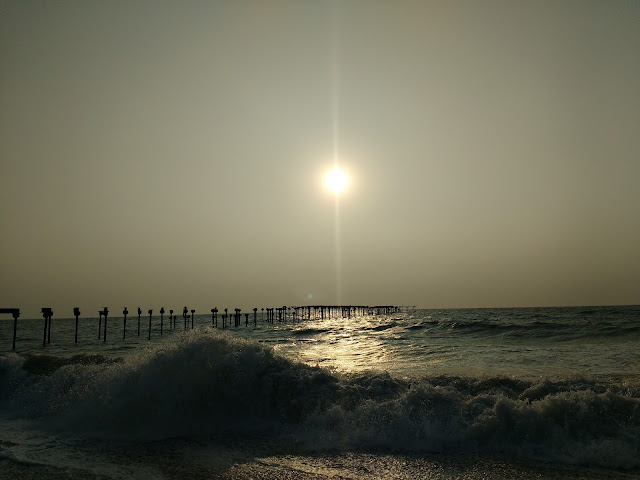 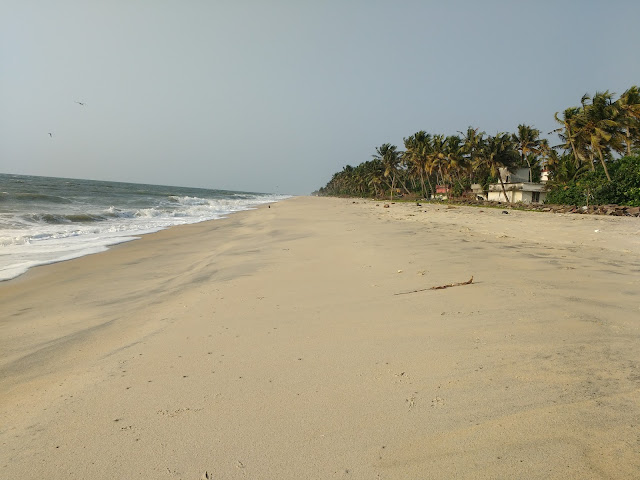 With memories and thoughts inside and the beach outside, I felt something that can't be justified with words. Then found a roadside food stall for dinner and had beef, dosa and idiyappam and returned to room. Spoke to a co-traveller for some time in the room. He suggested staying in Marari beach is better than staying at Alleppey beach. Then he told about his boating experience. Boat jetty ride is available with government and private boats. They will take you for 2-3 hours and charge Rs. 900-1200 (depends on your bargaining ability). Private ones charge you Rs. 500 per hour.

Next day I reached Varkala via train again.
I wanted to spend more time at Varkala. So had booked train at 6:30 am and reached Varkala railway station at 9:15 am. The dorm room I had booked was 2.8 km away from the station. Again walked and reached my room. What a scenic view it was to see the sea from  the helipad area! I badly wanted to take a plunge in the waters but waited an hour as I was tied to book my return tatkal ticket to Chennai. After booking the ticket, kept my bag in the room and swam for an hour in the sea. 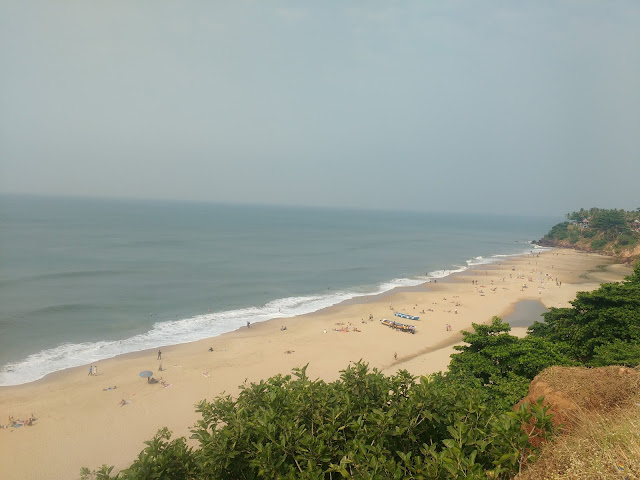 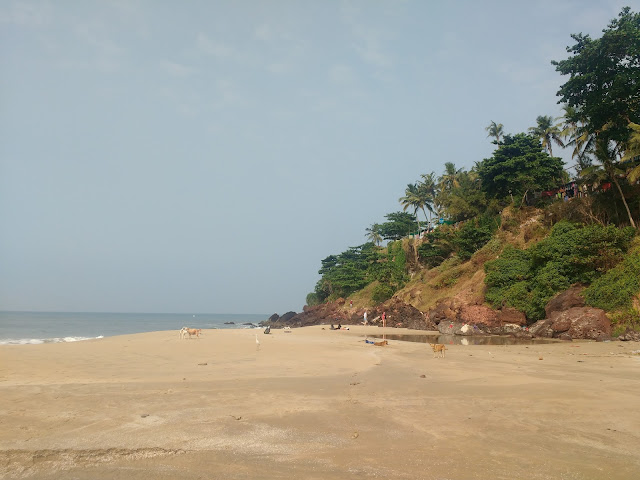 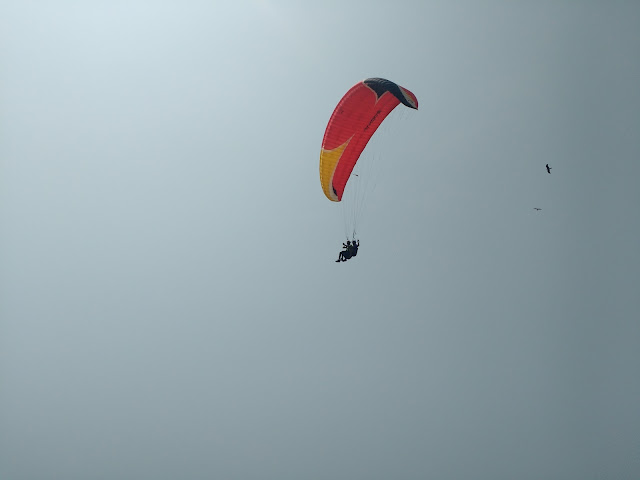 Then there I saw people on the Paraglider. It costs Rs. 3500. I observed the ride for some time and left the place. I walked for some time, had lunch and took rest in the room. The dorm was mostly occupied by foreigners. The thing I liked most about them is that they didn't disturb others. Even if they had come with friends, they always gave them their private space for their own me-time. It was a good thing I observed in them.

I started the evening walking over the cliff. Shops and restaurants lined the entire length of the cliff. I kept walking and the line of shops were never-ending. After a point, I started walking back towards the room. Fresh sea food were showcased in front of every restaurant. They prepared and served whatever we wished for.
Next day started with some walking, exercise and swimming.
Then I went up the cliff and walked to its end. There were only restaurants and hotels. Some were remarkably rich and beautiful.
I vacated my room and went to Trivandrum. The travel was one hour from Varkala. From there I wanted to go to Kovalam beach. So I reached Kovalam beach from East fort bus stand (1 km from Trivandrum central ). This beach was very commercial. I went up the lighthouse and saw the entire view from the top. 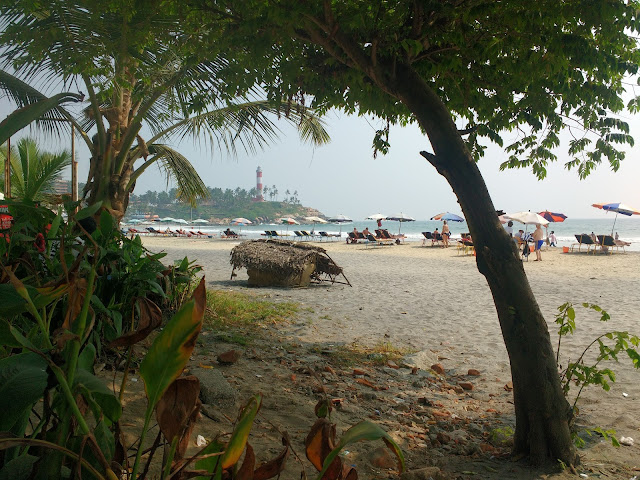 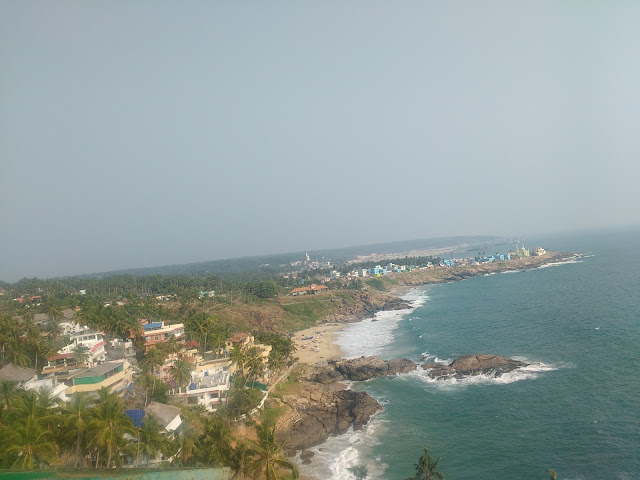 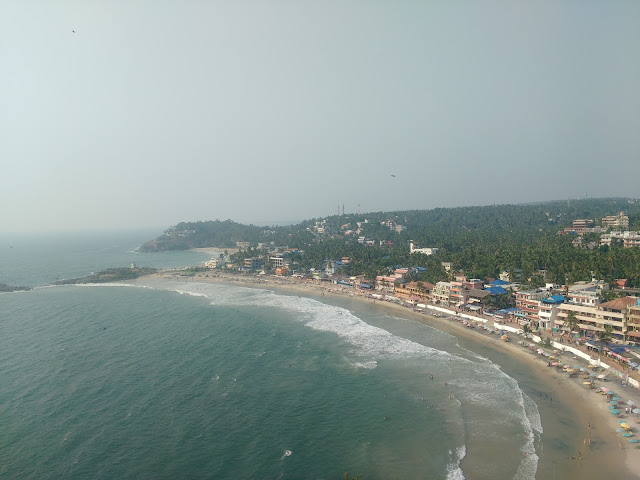 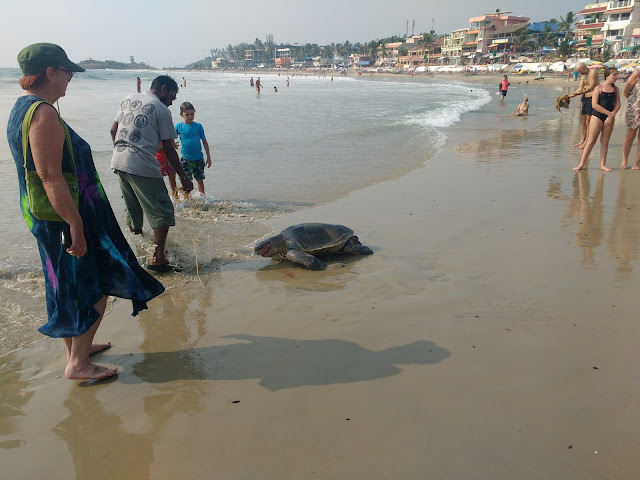 After Kovalam it was time to reach Trivandrum railway station.

This trip gave me many different experiences. Language problem turned out to be both good and bad for me. Bad in the sense I would not be able to ask others about food and places to see. But that did not become a major problem as I should figure out these things myself. So that wasn't a big deal. The good thing was, maybe because of this, I didn't speak much to others. Usually when I go to trips with friends, I would talk non-stop the entire period. This one time I spent time with myself more than talking to others and liked it.
The only fear in this solo trip was that I couldn't keep my mobile and wallet safely (the things I totally depended on during the trip - including booking tatkal tickets). My heart kept saying that just like I won't take others' bags, others won't take mine. But mind often asked what if someone takes something. In the end, heart won ;).
Finally I boarded the train to Chennai.
Train Started. Trip Ended.
Allepey, beach, Bus, Kerala, Kovalam, lonely traveler, solo traveler, Train, travel diary, travel photography, Varkala beach