4th December 2014
I reached the Chennai Central railway station at 2:20 am IST. My train was at 6:40 am. Reached early to make sure I can put my bike on the train. Came in through the Moore market way, so that I can take my bike in to the railway station, to reach the parcel office. There were RPF men guarding the gate, got down and asked him if I can take my bike in to have it parceled. He said the parcel office only opens at 4 am, I can take my bike in then. I can have it parked outside until then.
Had to wait for 2 hours. I am bad in waiting in a place. I kept moving around in the railway station. There were two huge waiting halls. Rows of chairs to rest. 85% of them were occupied and most people chose to stretch out and have a good night sleep, they were all on the floor. Had to carefully navigate through them to find a chair to rest. Popped in my headphone and started with the music. Every 20 min or so would move around and find a different place to rest.
It was 3:30 am on one of my walk around saw a railway employee, asked him when they will open the parcel counter. He said the same, 4 am, but the guy who parcels the bike will be in soon. He can prepare the bike and will help in having it  loaded to the train. After 10 min or so, the guy came to the parcel office where I was waiting for him and helped me take my bike in.
He started to drain the petrol. Drain in the sense, filled up the bottle to sell it out. After it ran dry from the tube, he stuffed in a piece of cloth for the left over petrol to be soaked in it. After 3 run with the cloth the tank was dry. Next he had to dry up the carburetor. He started the bike and let it run, until it stopped after running out of petrol left over in the carburetor. Then he packed the front doom and the seat with cardboard sheets and gunny cloth.
Then came the costing. He started at a whooping Rs. 1,300. He gave a long list of bribe he had to pay to get the bike on the train. I wish if the system was transparent and was informed to avoid these men making money pointing mistakes at the system. Just one of these guys can stop this whole process and I can be left running from pillar to post. Finally settled with Rs. 1,100. The actual bill for the railways was only about Rs. 350. Rest was all for him and the made up bribe list (Or if there were real).
Chennai to Coimbatore:
Was waiting to hop in to the train. Good I had known I will be tired and sleepy, I had booked in a Chair car. I was thankful to me 2 months before ;). The train started on time at 6:40 am and I called it a day (Night) and fell asleep.
Woke up at 9 am and it was a long push until 2 pm. Still had music going.
Got down, went to  the parcel compartment, had the bike unloaded. Paid Rs. 100 for unloading and to get the gate pass to take the bike out of the railway station.
Pushed the bike to the petrol bunk near-by, was hardly 200 m away. Filled in with Rs.300 petrol (They did not have a credit card processing machine, so had to fill with the money I was left with).
I was still feeling tired and sleepy. Had padded up for the ride in the petrol bunk, choose Coonoor to rest for the night. My back pack was tied to the rear seat, my camera back resting on the petrol tank. Set the google map directions to Coonoor.
Coimbatore to Coonoor (70 km):
First few kilometers was to escape from the city. The way leaded to a bridge, like the one in Kathipara, Chennai. The ramp to this bridge had a sign board showing the places it is leading to. I as looking for Mettupalayam/Ooty. The board was a little bigger than a LKG student slate. The font was soo small that I made sense of Mettupalayam only when I passed it and chose not to take the ramp. Had go round to come back and take  the ramp. Coimbatore to Mettupallayam was a decent ride, still wanted to escape from the commotion. First time was padded up for the ride. It was not comfortable, the ankle guard was slipping, knee guard was not in  the right position and the gloves was a little tight pressing against the thumb, was sweating inside. I chose not to listen to songs while riding. Want to experience the ride as it is. All my senses on the tarmac. Should make my way past Mettupallayam to get what I want. On the way I chose to have my lunch. My selection criteria is to find a shop cooking using wood for fuel. Found one, had 4 Chappathy and Chicken fry. It was Rs. 90. If it was the same chappathy and the quantity of Chicken in Chennai, this was Rs. 180 in Chennai. I tipped the server with the balance Rs. 10, he did not want to take it. I still insisted, he did not want it. Is this real.
Passed Black thunder, now the actual journey started. This is what I was waiting for, for the past 9 months. The road was good, temperature dropped within a few hundred meters. 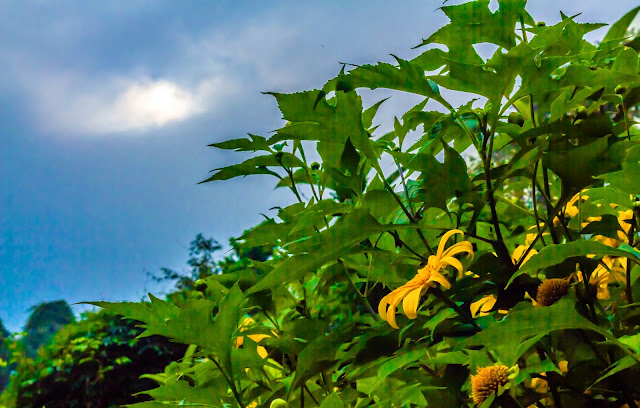 The gloves now felt comfortable, it backed up to warm up my palm. The camera bag on the front backed up as a wind shield to keep my torso from cold breeze. I like cold climate. To tackle the cold climate, I only had a thin sweater with me, it is more a woolen t shirt than a sweater. To handle Rain had a DIY rain cover for the camera. Did not have anything for me :). Why add more weight.
Reached Coonoor by 5:30 pm. Looked around for a place to stay for the night. Went in to Venkateshwara lodge. It was Rs. 500 per day. I had no plans to stay for a day, I only wanted a roof for a night. Took the room, was not good for me to recommend to anyone. It had double cot and the room was a little bigger than the cot. Hot water only available between 6:30 am to 8:00 am. Dropped my bag, untangled myself from the riding gear. Jumped on to my bike again to find a nice spot for the golden hour. Anyone in to photography will be waiting for this golden hour (Sunset and sun rise) when the sun splashes a cocktail of colors on the sky. I wanted to go to a nearest view point as soon as possible to be there for the sunset. The nearest was Lamb's rock. Looked for the route map and started to make my way. Not more than 10 min in to the ride, it was getting misty. The visibility started to drop. After a point, it dropped to just a few meters. Stopped for sometime and spent time to learn to shoot in fog. 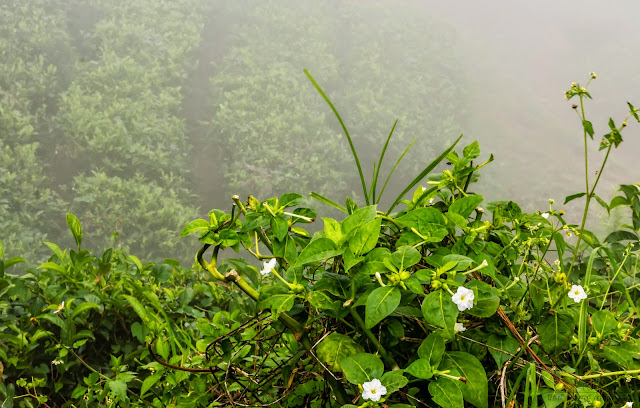 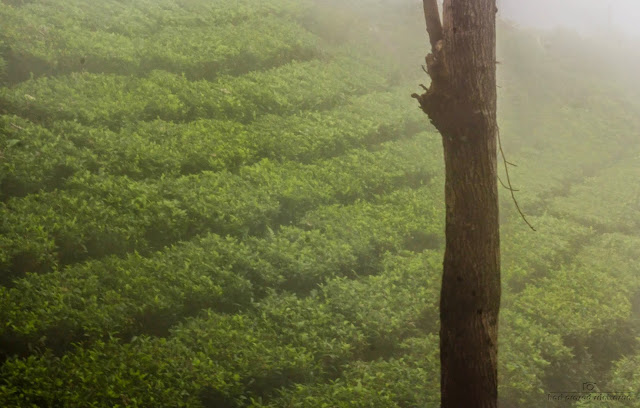 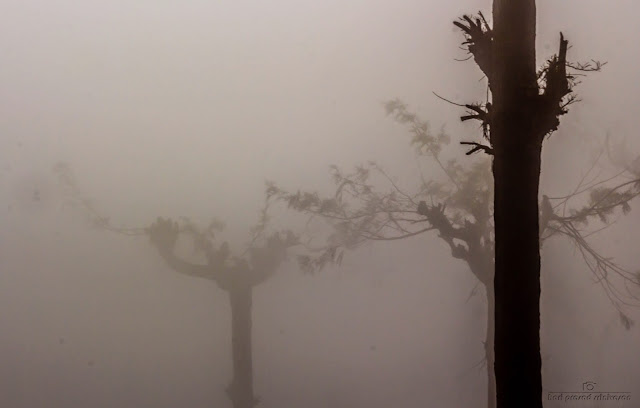 When things were a little better, started to ride again. I came to a busy place, it had a big bus stand. I was thinking if I made a mistake by taking a lodge elsewhere, as this place was buzzing. Few more meters I saw a railway track crossing, this looked similar, turned right, I saw Venkateshwara Lodge again 🙁 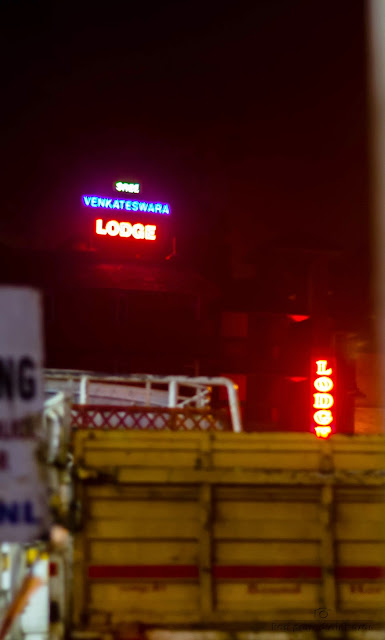 I was riding in a circle 🙁 I am still sure I did not take any wrong turn, still I landed where I started. It became dark and I lost my patience to go to Lamb's rock.
Went back to the room, jumped in to my shorts and tees. The temperature was low, still did not need a sweater. Went to Coonoor market, wanted some wisdom from an Old monk. Only in cold climate one can realize his preachings. He was not there, so had to settle with an autograph.
Went back to the room, when I was done and was ready for dinner, again came out. Crossed a Hyderabad Biriyani place. For anyone who has had Biriyani in Hyderabad will know what is it when they serve it elsewhere. 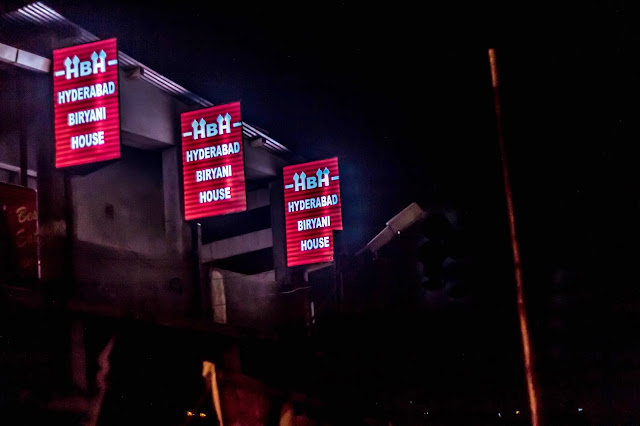 Found a row of street food shops, happy to try, got enough to stuff me for the night. 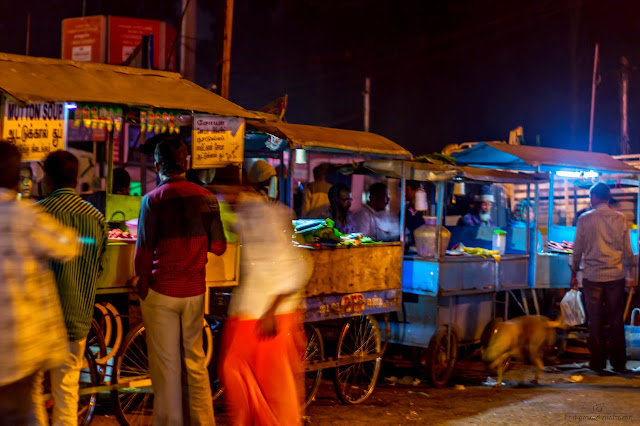 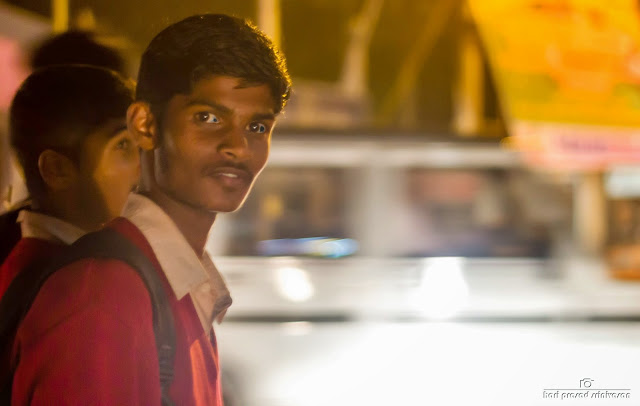 Came back to room, finished my dinner, kept the alarm for 5:00 am, to get up before sun rise and take few pictures when lighting will be at its best.