It was again an early start, got up at 5 am, cold water bath and out by 5:30. Wanted to be in Mullayanagiri for sunrise. Problem was, I had little more than empty on my fuel gauge. Was told the Mullayanagiri route places will take about 85km up and down, then it was Kemangundi which will take 100km up and down. With the ghat average of 50km/h, was planning to cover these places by 3 pm and start from Chikmangalur. Now to fuel-up need a petrol bunk, two bunk I tried were closed. With nothing else to do, went to have a tea. Spoke to auto guys there and came to know about a bunk that opens early. Fuelled, missed the sunrise opportunity, still made it to Mulliyangiri through beautiful twisties. Reached Mullaiyangiri by 7 am. The view was out of this world.

After reaching the base found that the viewpoint was on top of the peak, now had to start my ascend to the top of  the peak to call it conquered. With half a mind started walking, took two break and reached the summit ( 😛 ). The view was all worth the climb. Clicked few photos, and with a quick cheat sheet on composition had other click few pics of me. I had to capture it, illana ooru nambadhu.

From Mullaiyangiri the next point was Manikyadhara Falls. The route was filled with Jeeps where people said I had to take a Jeep to reach the place. It was a 10km away and cannot make it on a bike. The ‘cannot make it on bike’ wanted me to try it on bike :D. Went for it. The route was in deed difficult. The road was poor and steep. Had to maneuver carefully. I thought I took a wrong turn and had to take a Ú’ turn on a narrow road, the road shoulders were padded with grass, so went reversed the bike on the grass and then knew the grass were 2 feet tall, what was seen from the road was the tip. The rear went down the shoulder of the road. I was hanging there with the front wheel still on the road. Tried accelerating, but got no traction on mud and grass. Rescue was in sight, a jeep stopped to help me out. Three guys pulled the bike out, quick handshake and off to Manikyadhara Falls. In the falls it was only two more person other than me. Sat down and was staring the beauty of the falls. Clicked few pics and was walking back. 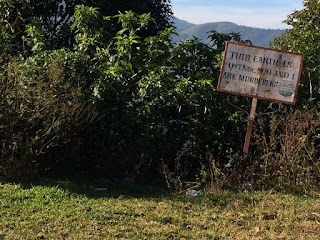 Just a few meters away another guy from Rajasthan, a no-mad with a clay filled pipe asked me to try the falls and it will give me peace. Took the words, with no cloth to change, still tried the falls. Dressed up and started again.

Next was a lake which was another 20 km away. This route was all the more difficult. Finally at a point I was not able to push the bike more and had to take it on foot. 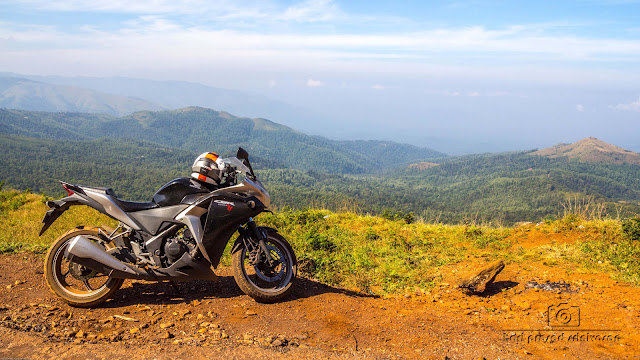 The lake was a little more than a puddle 🙁 I think I am on a wrong lake (Pond). Still enjoyed the ride. I was all alone in this point too. Clicked few pics and started from the lake. 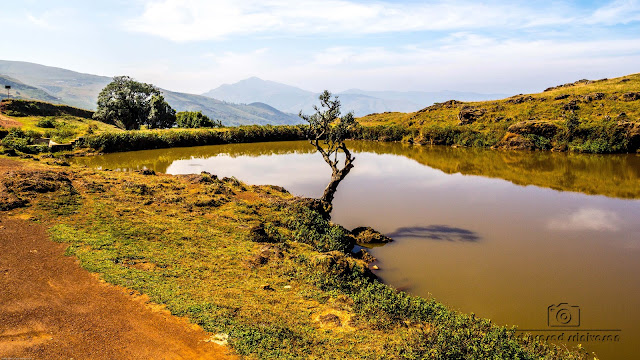 Went back to the Jeep place and again information gathering to reach Kemmangundi. They say the same road will take me to Kemmangundi, this was through Bhadra wildlife sanctuary. The other route was a deviation for which I had to again travel 12 km. Did not want to go round, so took the route through Bhadra wildlife sanctuary. This was some 60 km away. The ride was a challenging with steep twisties. Before 20 km got a request for a lift, happily took an estate worker on my bike. He was Tamil, was talking to him  about the place, how difficult the road is and so on. Dropped him after 10 km and it was another 10 km before I reach Kemmangundi.

Took a right bend after I dropped him. The nightmare started. The stretch was getting from bad to worst as distance passed, it was bad road – road was there – loose gravel – puddle of water and so on. Was getting tiresome. I was the only one on this road.

There were jeep trail but no sign of bikes trails on this road. After 2 km, a Pajero was coming in the opposite direction. He stopped to talk, asked him still how far the road it bad. It was bad all the way for the next 8 km. It needed all the concentration, it was a meter by meter concentration to inch by inch concentration to make sure I am putting my tyre on the right spot, was not able to make more than 20 km/h here. Occasionally would be 30 – 40 on loose gravel which was better than broken road. 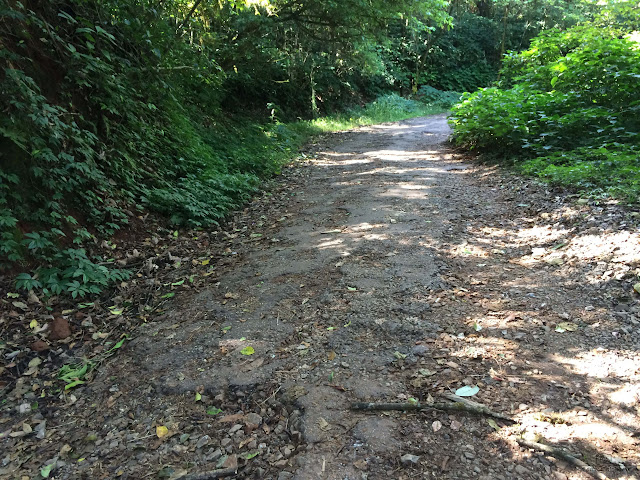 At the end was a check post. Looks like I was only the second person t have crossed this stretch for the day. The last one was a Jeep. Someone should have warned me. May be good no one did, else would not have got this experience. This made me trust my bike even more. The tire and suspension all held up in this unforgiving stretch of once a road.

From the check post Kemmangundi was 12km, went straight Kemmangundi was not in sight, but there was another falls that had come, Kalhatti Falls. Went to the base, here had to leave my shoes as this place had a temple in the base. Right near the temple was a falls where people were enjoying in the waterfalls, but many were climbing up. Followed a group, further up we went there were two more levels of falls and there was no sight of the main falls. It was already a 20 min climb and people who were returning said the falls is another 1.5 hours ahead. Had to abandon the plan as I will lose time if I had to start from Chikmangalur today itself. So, walked back.

This route was another wrong turn I had taken. Kemmangundi was right from the checkpost than straight. The road was bad to a point and was getting better. With no prominent sign board on the way, saw two parked cars right at the entry of a narrow forest road and a small green board mentioning it was the way to Shanthi falls and z point, which is the viewpoint in Kemmangundi. There were foot prints on the forest road, so parked my bike, did not know how far had to walk. Thought this point will be on road, but looks like this has to reach on foot. After a few meters saw tyre track. To save time again, thought will take the risk on my bike. The people from the car were walking just a few meters ahead, passed them and again I was all alone on the road. This stretch was even more bad than the earlier forest root. Mud and puddle of water made it difficult to get through
.
The bike was all over the place loosing traction on loose gravel. Still went for it and then it was to a point where only one person could walk anymore, this was no longer a road. Was stuck mid-way, no way for a ‘U’ turn. Had to reverse the bike all the way in the slippery path. Left the bike under a tree and started walking.

The first point was Shanthi falls. The view was a postcard view. Clicked few photos, filled my bottle and started the trek – all alone.

Was very little chance to get lost as the trail was visible. Still had hit a rock which was the only spot which was challenging to get down. Was on my four to climb down the rock. It was tiring, the final point was in view, boosted my morale and kept walking and reached the final point.

Trek route to the Z point:

Had no words at this point. Sat there and was looking how big the world is and how small I am in this huge space.

Looked back at the trail I had covered, which I did not realise how beautiful it was until I came past it and turned to look at it (Life lesson). Clicked few photos and a video.

On the right shoulder you can see the trek path:

Pano view from the Z point:
Now it was time to go. I had planned to leave Chikmangalur by 3 pm to reach another spot the same day. To head back to the entry point itself took my 3 pm. The same rote had a rock garden left which was possible by bike and it is where every other tourist would go. Reached the spot, felt too artificial. Did not strain to climb up to see the garden, passed this one. With only one tea in my tummy, still did not want to loose the day light for the travel, headed back to Chikmangalur, this time through the Kalhatti route which was everyone else would take.

Reached Chikmangalur, refuelled again, checked out from my room, started from Chikmangalur at 5:30 pm. Next destination was Madikeri, Very late I came to know this was Coorg :P, I excused my ignorance.

Night ride was not easy with my helmet. It was perfect for day time use. Night the visibility was cut, had to keep the visor open, which gave way for insects to target my eyes. The route here as well was twisty ghat road, at given opportunity was following faster moving cars which would have a longer view and would be able to judge turns better. Just had to follow them, one gypsy was flying at 70km/h, tailed it for a long time which saved lot of time and need not worry about opposite traffic or judging the bend. Chikmangalure to Madikeri was 150km, it took a good 4 hours. After reaching Madikeri, took a cheapo lodge, the worst one in my travel, had my dinner in a local’s favorite place. This was again knowledge gathering from people there which most tourist would avoid. Got used to getting my list for the day, placed the request and went back to bed.

Continue to Day 4 and an extra day >>