This year trip was in my mind from mid of May or so. Goa was supposed to be a solo, but not totally unplanned. Had Harish and Ram join me and it was all fun – worth it. Next was a planned – unplanned in Oct/2015, this was planned along with Ram and Maari even from the beginning. So cannot count this for the solo planned-unplanned for this year.

I was still waiting for a solo planned unplanned for this year, after having tried this for 2013 (Tiruchendur-Kutralam-Manjolai) and 2014 (Coonoor, Ooty, Valparai, Athirapally), and having tasted the experience of traveling alone.

This year took a major decision to get a new bike before the trip. The search started by September/2015 and bought the bike in October/2015. Preparation was the same like last year, with just a few changes as few items were taken care from last year trip itself.

Few items I had decided to leave back was my 50mm 1.8 lens as I was comfortable with my 17 – 50 mm 2.8 from Tamron. This is a better all-round lens for my needs. Also left behind the monopod to keep the weight low. My first plan was to pack all of the stuff in my Forlac 50L bag, but again in the last min added a secondary bag, later realized it was a very good decision.

Guidelines for the trip:

Otherwise, everything was left to happen as it goes 😉

What is fun without a spanner in the plan: The first deviation in the plan was few personal commitment that came up only on Wednesday minutes before I was about to start. Was roaming around getting things done but my mind and soul was wanting to leave in to the unknown to venture in to uncertainty. This was in the making for 6 months and it was almost coming to an end before it could start. Setting things around me, unwinded myself for the next  days. I tried to sleep early to start early morning on Thursday, but my mind would not rest. I was in and out of sleep from 11 pm. Got up at 3 am. Packed and left my house at 3:30 am.

After starting at 3:30 am from home, decided to head west as weather was bad in south and also north of Chennai. So set the starting point to Bangalore and started the journey. Weather was all good until I reached Poonamallee - it started raining.

Rain, try better. I am not going to stop be it whatever 😀

The first milestone was to cross Kanchipuram, stopped for a tea then geared up after Kanchipuram. The gear was all from last year, fox knee guard, elbow guard and pro biker gloves. Wanted a riding jacket and a better knee guard, but budget constrain forced me to go with what I had. Helmet was from LS2, got is on Monday as my Vega was not stable past 100km/h. Did not want to take any risk with helmet, so got the best I can afford.

After Kanchipuram came the toll plaza and the 6 lane toll road. Wow, it was a larger playground than what I am used to. This gave me all the confidence to go past 100 km/h. Wanted to warm-up the tyre before I go faster, after a few minutes tried going up to 120km/h and dared to test the bike till 145km/h. Would try again and again on all straight stretches, the bike would lock in 144km/h, but would not reach 145km/h. After a few tries and shifting gear at higher RPM, the bike touched 145km/h. Felt like Armstrong had set foot on moon :D. The secondary bag on the front provided the wind barrier from my chest, kept the cold air from hitting me. This gave all the more confidence to hit higher numbers. This testing went on for a long time and then came the heart break; I found the fuel had reached to just one point above ‘E’ after traveling for 220km. Was worried if speeding took a toll. Went in for refueling before Bargur and to my surprise it took about Rs.550 of petrol to fill the tank. Hence the bike was still maintaining 25km/l, which is what I was expecting 😉 Now I need not worry about hitting higher speed.

The ride was buttery with very less vehicle on road. Took a lunch break, in a road side Dhaba. Relaxed for a while. The first date got over after Hosur when I was about to enter Bangalore. Traffic was bad and it was at snail pace. Now it was between 20 and 40 km/h.

Until this point I did not know where to go. Reached Bangalore and I was blank. It took me 4.5 hours to reach Bangalore. Then Ram came to mind. Shimoha, have heard him mention how beautiful Shimoha is. So decided to head to Shimoha for the day. Shimoha was 300km away from Bangalore. Took the nice ring road to bypass Bangalore, to my surprise, there is a toll fee even for tow wheeler on this road. But it was all worth it. The road was all the more tempting. This time dropped my shoulder and elbow down, hugged my front bag with my elbow, tucked my head down inline with the front shield judging the stream of air coming above it. Again started shifting up at higher RPM, changed from 5th to the 6th gear at 110km/h. This time did not let go past 145km/h. The bike reached 152km/h after a steady acceleration. Boy – o – boy. After hitting 150km/h, riding at 120km/h felt comfortable and gave much better confidence in handling. I started trusting the bike more.

So far had one tea break, one brunch break and a filling break until Kibbanahalli which I had reached by 11 am. This is 120 km from Bangalore. It was time for refueling. Good news was, I had Rs.200 in my purse and my account had Rs.132 in it :D. The last fueling was with my credit card, I cannot expect the same here. It was time for call a friend. The response was rapid, 3k credited. Took the cash and fueled for Rs. 600 there.

I reached Shimoha by 3 pm. I was searching for mountain range, cold climate. I was expecting Shimoha to be like Coonoor at least, but this was like Salem, Trichy, it was not even like Coimbatore :(. Ram, ippadi pazhi vangitiye. I was already tired being on the road for 12 hours. I asked for tourist location around Shimog, ppl suggested lion safari and a dam. No way. I asked for more places and a auto driver suggested Jog falls which is 110km from Shimoga. Had already covered 650km, another 110km should not hurt (It was already hurting 😉 ). Reached Jog falls by 4:30 pm. Started talking to cab drivers there and one guy owns a home stay accommodation. Settled for a room for Rs. 600 a day. He also said his mom will prepare dinner and breakfast for me. I was waiting to taste their local dish and agreed.

Put my bags in the room, took my secondary bag with the camera in it and headed to the falls. To my surprise, Jog falls was a Jog fountain. I cannot complain, it took 760km and if this is it, it is all worth it 😉 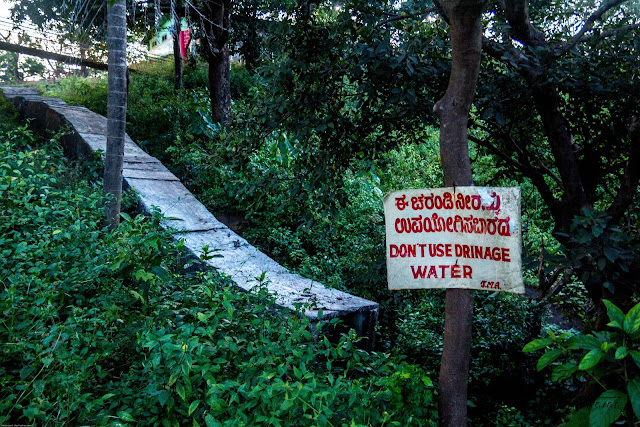 Went back to my room, was served with roti made from rice flour, Chutney and yummy sambar. Had my second meal for the day and slept at 9 pm. Set the alarm for 5 am and went to bed.