Day 4 and 5 : Solo bike from Chennai to Heavenly Coorg

This was again an earl day for me, got ready and was down by 6 am to start my day. It became a routine to go for a tea and gather information to plan the day with the list I had. Now was suggested Tala kavery which is 45km from Madikeri. I thought this is the starting point of Kavery, was expecting rain forest with a huge lake from where Kavery flows.

Enroute was Bhagandeshwara temple. Here was talking to a flower vendor lady who came and settle in this place from Aarani, she was talking about this temple and stuff. Clicked a pic to document.

Went around the temple and the next stop was Thalakavery. To my surprise this was again a temple. What is considered as the holy water was a tiny pond. My imagination was way beyond what I saw here. Was a little disappointed. To the right was another peak on which people were climbing. Came this far, did not want to miss the view. So pulled up my weight to the top 😉 The view was again worth it, I started to feel all the view points were all similar with different mountain arrangements 😀 Clicked a photo, took a video. Helped another couple to take a photo and was done with Thala kavery.

Pano view from the top of Thala Kavery:

From Thala kavery it was back to Madikeri. Did not hear anything interesting except for Abbey falls and Mandalpatti. Both were on the same route, so headed to Abbey falls with Rs. 28 left in my pocket, placed my next request for additional cash. The cash reached on time (Actually late, yes I am complaining :P). Found Rs. 40 in my bag, change from nice ring road. This was enough for any paid entry. So headed out of Madekeri again.

From Abbey falls to Mandelpatti was another 17 km, road was already bad, the last 5km stretch was even more challenging. Hit a very steep slope with loose sand and boulders. Tried climbing on the bike, but had to abandon the attempt to have me in one piece to reach Chennai. Jeeps were bouncing their way on top if this slope. To get the bike down was another task with no way to make a U turn in the middle of the slope. Then there were two more bikers on KTM and Duke who made the attempt, both were stuck in the middle. Lifted their bike rear to turn the bike both made it safely. 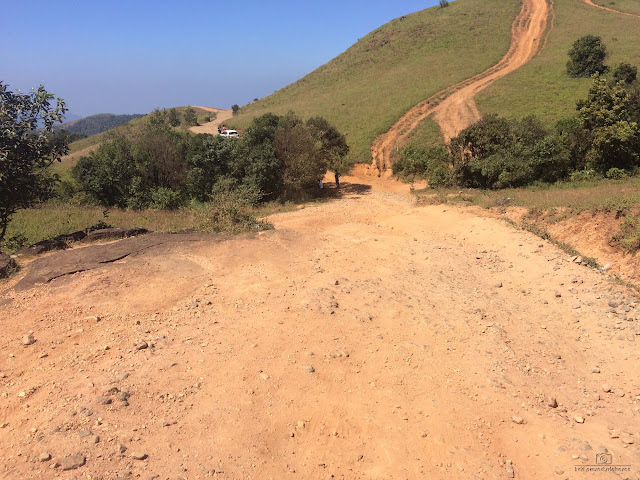 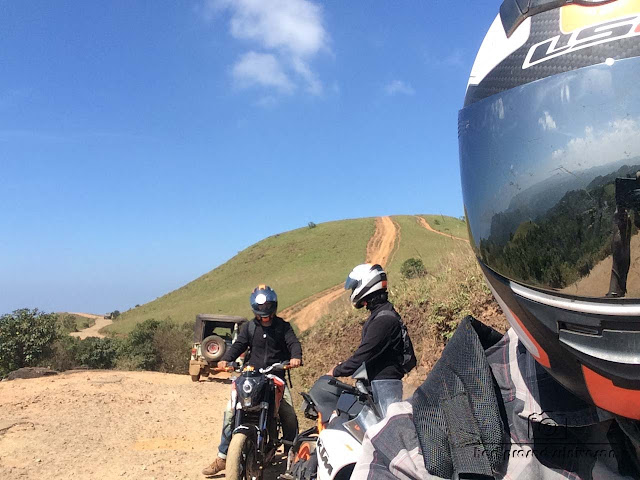 From then we three planned to travel together. The two were to go to Mysuru. So next plan was to go back to Madekeri, pack and get started. On the way planned to visit a river front and a Tibetian monesraty. Took the lead on the Ghat road and set the pace. Reached Madikeri and packed my bag while I asked the other two to finish their lunch. I was still living on one tea on the morning till evening. Their lunch went on for a long time, having geared up and saddled up my bag, I was not able to leave my bike. We started at 3:30 pm, reached the river front round 4:30 pm on the way, nothing interesting, this was a routine touring place. Took no pictures here. We sat down for a while  and started back to Mysuru. On the way I stopped to have food to carry me to Chennai the same day. Was planning to make it to Chennai by 2 or 3 am. From the Dhaba saddled up and started, the other two decided to wait in the dhaba as their friend has said he will join them.

With series of rain and wind condition after Mandya, reached Bangalore only at 12:30 am, stuck on the nice ring road with poor visibility and rain water hitting the eyes. Called up Kalesh (Hyderabad roomie, currently in Bangalore) for help. Went to his home, changed in to his Medium size tracks and t-shirt. I wish if Kalesh has put on some weight. Settled in a lodge, had dinner at 2:30 am and called it a day.

This was an extension from the plan due to bad weather. Started from Bangalore at 10:30 am. Reached home by 3:30 pm in rain welcoming after Sriperambathur and heavy traffic from that point on.

Changed to something dry, switched on my laptop and was on time to start my work at 4 PM.

It was a packed trip, in total covered 2,300 km. I am not sure if I could have had the same experience if I had taken time to plan for this trip. Unplanned always rocks. Waiting for my next solo – planned – unplanned. Will keep you updated if I get lucky for the 4th time to pull this one again 😉