When an ICICI Assistant Manager applied for Software testing trainee

16th September 2009
For a long time now we had not filled the vacant position for a Software Tester in our office. Just two weeks back we had decided we need to fill that vacant position. I was on the man hunt and spread the word to different Software testing training institutes so that we can get someone fresh with little bit of exposure to testing and it will be easy for us to mold.
The First to respond was STC, they had forwarded 18 resumes to me. The First level of interview was telephonic, and I was looking only for their communication skill. Out of 18 candidates we shortlisted 2 candidates. One was Banu and the other was Mohan. I was very confident on their communication.
The interview was fixed on 16/9/2009 at 10:00 am. 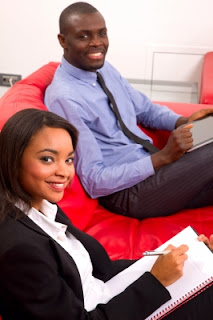 It was bang 10:00 am, and I heard both entering the office. I welcomed them, and made them wait for my Manager to arrive. In the mean time my MD had come to office. He wanted to meet the candidates first and asked me who came in first. I said "both came together". He said, "ladies first, ask the lady to come in". I sent Banu inside for the interview. It was almost 20 min, and my MD sent me a SMS asking me to conduct a written test for the candidates. I started to prepare the questions for the test. And there was a call from my MD, he asked me to come to his room.
I went in, and saw Banu working on my MD's Mac. She was seeing our companies website. I was puzzled. My Md, said the candidates should have looked in to the company site before coming in for an interview, and asked me to allocate a system for the other gentleman so that he can have a general idea before he goes in for his turn.
I came out, sat next to the other guy.
I asked him "Did u look in to our website?".
He said "No". The answer was very casual.
I continued asking "So do you have a general idea on what we are working on?"
He said "No, I did not have any time to look in to it. I was busy at work yesterday".
What??, he is already working for a company and has come here for a fresher interview. But these things are not mentioned in his resume. It just says he has completed BE in 2008. Also the answer was very casual. I thought he has not taken this opportunity serious if he is looking for a change over.
I asked him "So you are working now? Which company are you working in?"
He said " I am working in ICICI bank as a Assistant Manager"
WHAT?????, he has just completed B.E. and he is already placed as a Assistant manager in ICICI Bank. So why is he here. Has someone given a wrong job profile regarding this vacancy
I continued "How long are you working with ICICI?"
He said "I am working for the past one year, before that I was working for ICICI"
What the hell, he completed his BE, worked for ICICI and he is a Assistant manager in ICICI and he is looking for a Tester - Trainee job
I asked him, " But you have not mentioned these things in your resume, is there any reason?"
He was puzzled now, he bent forward and said "I did not send you my resume?"
Something Fishy... I asked him, "So, why did you come for this interview?"
He said "I am Banu's brother, I have accompanied her for the interview."
OMG, all this while I was thinking this guy was Mohan the other interview candidate. It was a big bulb for me 🙂
I was confused, and called Mohan. And he was still on his way and asked for another half'n hour. Already it was 10:40 am.
Finally, the day went on fine, and Mohan was selected for the position.
It was a very funny incident, and I thoroughly enjoyed the moment.
And thank god, I did not tell my MD that the gentleman came first for the interview. Else I would have sent him to meet my MD for his interview 😉
And my MD would have got something to write in his blog 😉
Image courtesy of Ambro at FreeDigitalPhotos.net
funny interview, ICICI, interview, Tester, Webstix