20th December 2018
The last time I went to Varkala, it was a solo trip when my wife stayed back home with our new born. I had promised them that I'll take them to the places I visited without them last time. So that's how this trip shaped up as Kaniyan's first birthday trip. The plan was Varkala - Kovalam - Thirparappu falls and Padmanabhapuram palace this time. We booked the train tickets and rooms well in advance and were eager to see if Kaniyan will have fun in his first trip. We had booked the Tambaram to Kollam Suvidha express to kickstart our trip.

At 05:40 AM, the train reached Sengottai and from there to Kollam, the train took its path on the hill. As the day slowly dawned, we could see the misty clouds hovering over the hill. As the train moved on, we saw the mist slowly giving way to the hidden trees. The path unwinded through numerous tunnels and curves along the hill with few houses here and there. We got to see such green beauty and passing streams while Kaniyan kept snoozing peacefully in an almost empty train. This train travel in itself was a dreamy experience and our trip started to get its meaning. 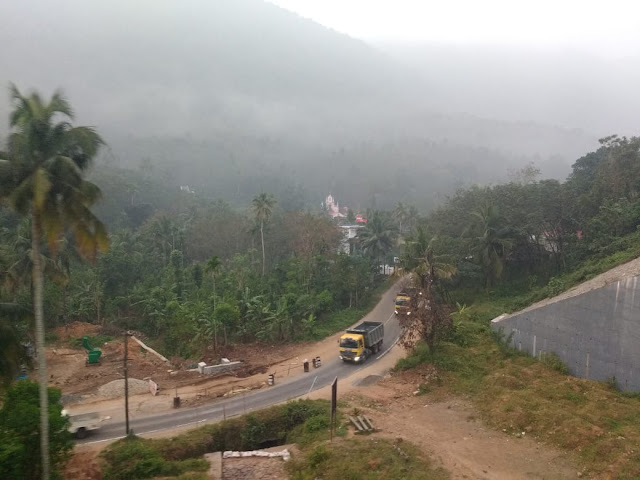 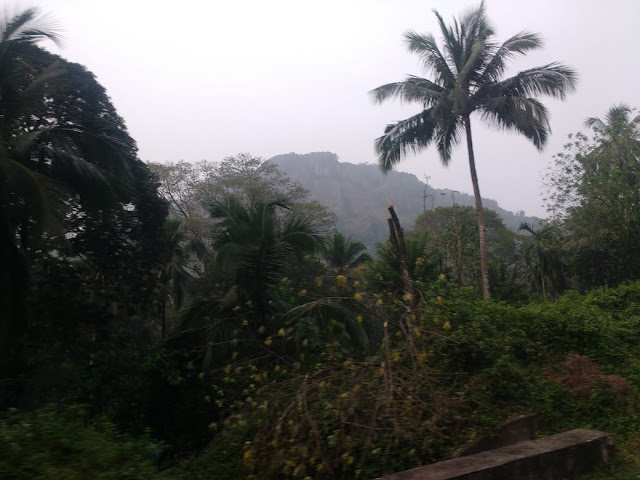 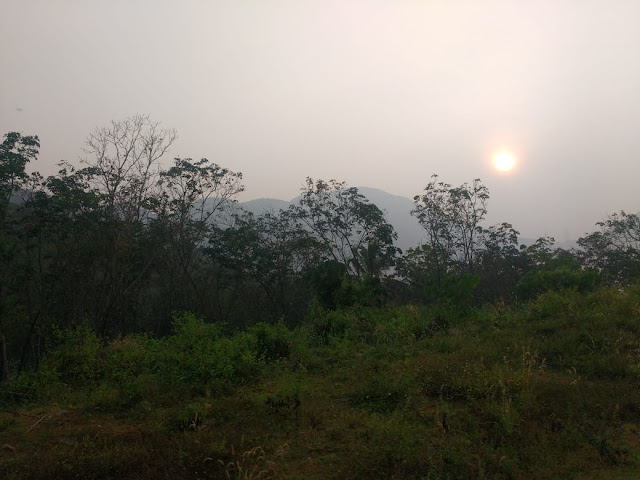 We reached Varkala from Kollam through another train. The beach and our hotel were 3 KM away from the railway station. We started walking to reach our destination after a small refreshment. We could not help but observe the houses along the way. They were either huge houses with huge gardens or small houses with huge gardens. This gave a pleasant feeling even though it was sunny. Most of the houses we noticed had rainwater harvesting system installed in their rooftops. It was nice to know that the people living there were responsible of their surroundings. Deep down somewhere, I wished that how nice it would be if our city/town was also like this. But thinking about how we build up all available spaces and how we sit inside concrete forest and talk about modern economic development, made me feel somewhat sad. 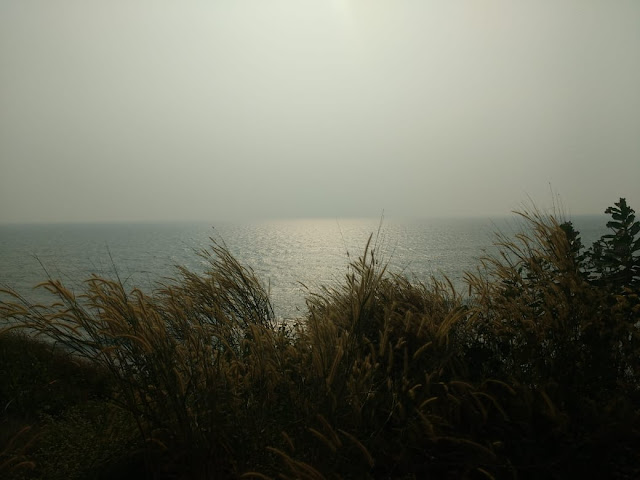 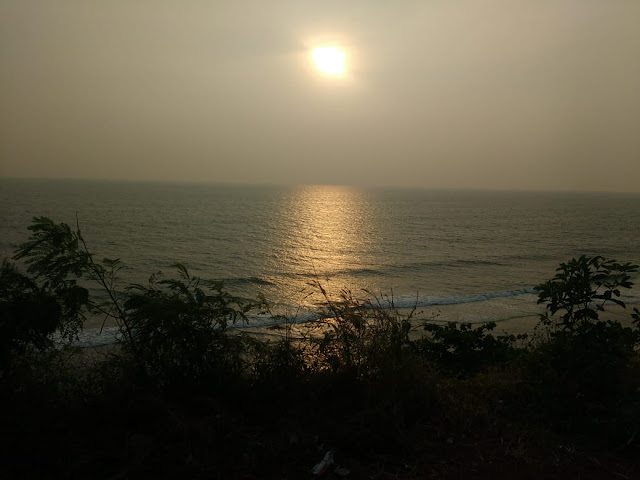 We reached our hotel and were welcomed by the sound of some group of friends singing "Happy birthday" for their friend. Smiling at Kaniyan, we took the keys to our room and freshened up. Then after lunch and some rest, we set off to the beach. The crowd was very less and nothing compared to my last visit when it was pretty crowdy. Kaniyan had a very good time playing at the beach. So we chilled for some more time there. Then we started walking on the cliff. The entire stretch is lined with hotels, restaurants and shops albeit with very less crowd this time, which is unusual for December season. Walking on the Varkala cliff means there are hotels and restaurants with nice decorations and music on one side and the sea with it's never ending waves on the other side. Then we had our dinner, reached our hotel and called it a day.

We reached Varkala station via auto this time after breakfast at our hotel. From Varkala we boarded a train to Trivandrum. On reaching Trivandrum while we were about to go to the bus stand, a policeman helped us out in getting an auto to Kovalam beach as it was hartal on that day and no buses were plying. We must say that from our experiences so far, auto rides are much better priced in Kerala than in Chennai and buses run on time at jet speed throughout Kerala. 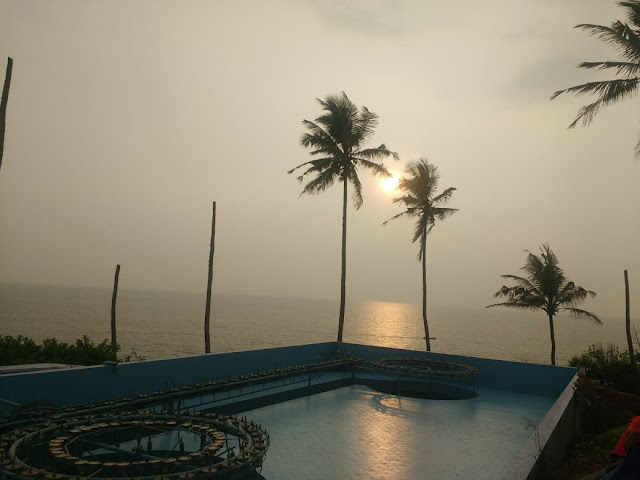 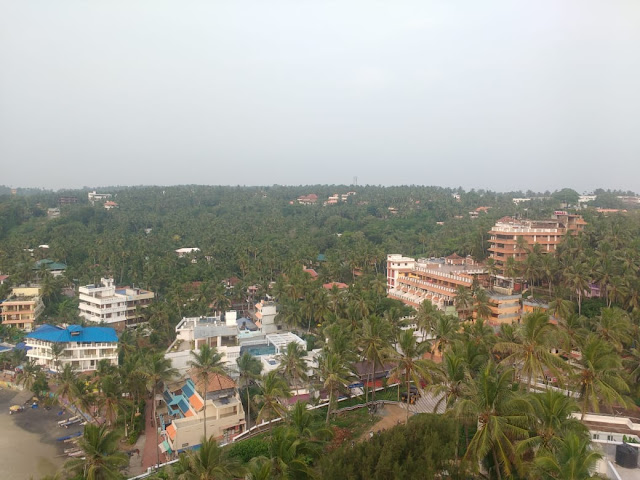 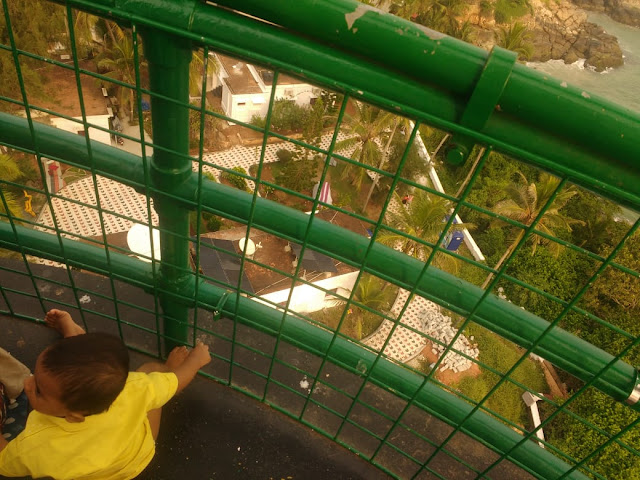 We reached Kovalam beach and walked to our room on the lighthouse beach. Crowd was less there too and our hotel manager upgraded our stay. We had lunch and in the evening we went to the lighthouse. One can see the abundance of coconut trees from the lighthouse top. As acknowledged widely, the view of the sea from the lighthouse is a divine sight and I cannot describe it better in words. Just to top this, Kaniyan decided to run round and round the lighthouse and had a hearty laugh when we caught him. Then I swam for some time in the sea and had the chance of interacting with two localities and swim with them. Then we sat for some time on the beach while observing the surreal surrounding as dusk crept in. Though the crowd was less, it added beauty to the beach in both our destinations. At night, we could hear the splashing of the sea waves from our hotel room. It gave us a distinctive sense of contentment.

We got to know from the hotel managers and auto drivers that many tourists, especially foreigners didn't turn up or cancelled on them for two reasons. One is the nippah virus scare and the other is the flood. Otherwise this used to be their flourishing season.
From Trivandrum, Thuckalay was 60 KM away. So we thought that we could reach in one and half hours. But the route went inside the city and the towns on the way. And our bus had a breakdown. So finally we reached our room at Thuckalay at 02:00 PM. From our room, it would take more than an hour to reach Thiruparappu falls via bus as it had numerous stops on the way. While we were thinking about it, our host offered to lend us their bike for rent. We enjoyed our ride to the falls. We could see the western ghats yonder and nearby too the roads were surrounded with trees and vegetation. It was a cold day. 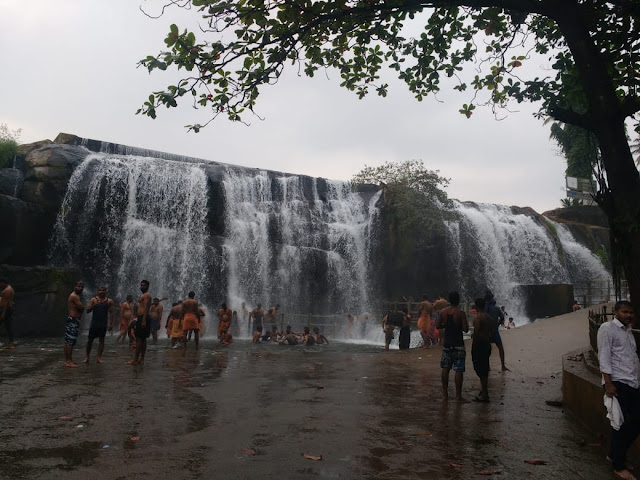 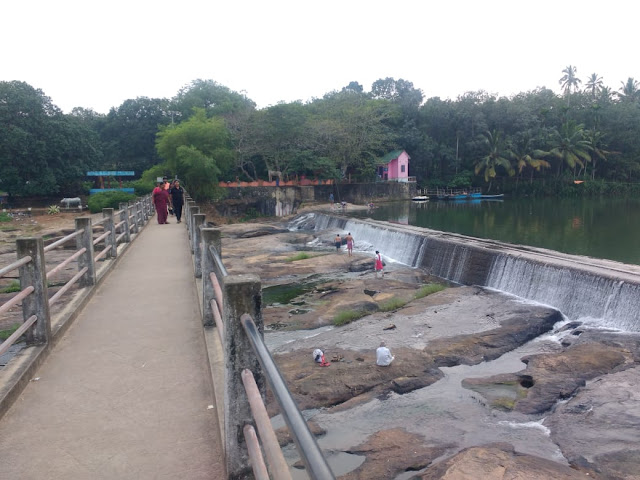 We reached the falls and completed the ritual of bathing in it. Then we went to dam from where the falls originated. We saw an elephant taking bath too and I had a short swim. After this, we felt that the entire day's travel was totally worth it and we returned to our room.

Since the palace was close to our room, we took our time to start the day. The palace had the royal feeling intact with the traditional furniture, building style and materials used dating back to the 18th century! We were like, "What a life the kings had". Then we visited the museum. It had ancient sculptures and rock scriptures, many written in Tamil. Then we returned to our room. After lunch, we boarded a Kerala bus to Nagercoil junction. That route also had some nice views of farmlands and mountains and then we reached the junction.
With that, our trip ended and we just had to board our train to Tambaram.

In this entire trip, Kaniyan coped up well and didn't give us doubts on our decision to take him to a trip so soon and in a cold weather. His food habits let him have something from everywhere we went (only less spicy). So he enjoyed the trip with good food, good playtime and good sleep at night. We were happy to have celebrated his b'day this way. Celebrating our kids' birthday with friends and family sure gives happiness but in our opinion, often is a stage to showcase where we stand in the society, to the people in the society.

Going to such trips that take us closer to nature only makes us feel how far we have moved away from nature. With this guilty realisation only this trip ended.